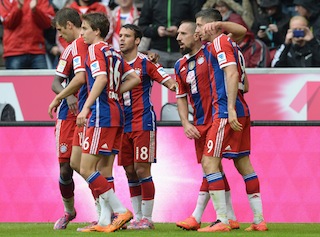 Pep Guardiola’s side remain seven points clear of nearest challengers Wolfsburg after defeating Leverkusen, who remain the last team to beat Bayern at the Allianz Arena, back in October 2012.

The visitors threatened after four minutes when Juan Bernat was forced to clear off the line after Karim Bellarabi pounced on a rare mistake.

But Bayern took the lead when winger Ribery volleyed home from a corner on 51 minutes to claim his 100th competitive goal for the club in all competitions on his 186th league appearance — the most for a French player in the Bundesliga.

This was an off-key performance from Bayern, who managed just two first-half shots, as they began a busy period of five matches in 14 days, including Wednesday’s final Champions League group game at home to CSKA Moscow.

“It was important for the team to get the win, especially before our Champions League game at home and three Bundesliga games in quick succession,” said Ribery.

Leverkusen, meanwhile, were lucky to finish with 11 men after Bellarabi hacked down Sebastian Rode in the dying stages but was only shown a yellow.

Roger Schmidt’s side drop to fourth in the table ahead of Tuesday’s Champions League clash at Benfica.

Earlier, second-placed Wolfsburg came from behind to claim a 3-1 win at Lower Saxony rivals Hanover 96 to briefly trim Bayern’s lead to four points.

However, Wolfsburg coach Dieter Hecking gave a grumpy reply when asked about his side’s supposed role as ‘Bayern hunters’.

“We aren’t ‘Bayern hunters’, I don’t have to emphasise that every week, do I?” he said, rejecting the German media’s tag for the Volkswagen-backed club.

“Bayern are the superior team and they’d need to play with seven men each week for us to have a chance to catch them.”

Belgium’s Kevin de Bruyne gave Wolfsburg a fourth-minute lead in the derby before Spaniard Joselu levelled for Hanover with a header, but both Wolfsburg’s second-half replacements scored within minutes of coming on to seal the win.

The result moves Schalke up to fourth in the table while Huub Stevens’ Stuttgart drop to the bottom on goal difference.

Schalke must win at Maribor and hope Sporting Lisbon lose at Chelsea on Wednesday to join Bayern, Borussia Dortmund and Leverkusen in the last 16 of the Champions League.

Having started his second stint at Stuttgart last month after replacing Armin Veh with a 4-1 hammering of Freiburg, the result showed Dutchman Stevens he has his work cut out to keep VfB up. They have won just three times in their first 14 matches.

Fifth-placed Borussia Moenchengladbach ended their three-match losing streak in the top flight with a 3-2 win over Hertha Berlin, who dropped to 15th.

Augsburg went third in the Bundesliga for the first time in their history with a 2-1 win at Cologne while Freiburg stayed just above the relegation places with a 1-1 draw at Paderborn.

On Friday, Borussia Dortmund earned a 1-0 win over Hoffenheim to climb off the bottom of the table and escape the bottom three into 13th place.

Germany midfielder Ilkay Gundogan scored Dortmund’s first-half winner and the victory, only their fourth of the campaign, offers last season’s runners-up some respite after they lost eight of their first 13 league games.