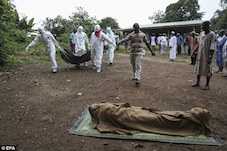 A tenth doctor has died after contracting Ebola in Sierra Leone, the government said on Sunday, increasing alarm over the safety of medics battling the deadly epidemic.

Aiah Solomon Konoyima’s death late on Saturday at an Ebola treatment unit in Hastings, near the capital Freetown, came just a day after two of his colleagues were killed by the virus.

“He had been in the centre for over a week and few days ago he was moved to the recovery ward as he had great signs of recovery,” chief medical officer Brima Kargbo told AFP.

“The continuing death of our doctors and the mode of transmission of the virus are worrisome, and we will intensify all skills to arrest the situation.”

Even before the Ebola epidemic spread from Guinea in May, Sierra Leone, one of the world’s poorest countries, was still struggling to rebuild its health services after a decade-long civil war in the 1990s.

In 2010 the nation was estimated to have around one doctor for every 50,000 people — or roughly 120 doctors for the entire country.

The doctors are among more than 300 healthcare workers to have died treating patients infected in the deadly outbreak, which appears to be stabilising in Guinea and Liberia but is still spreading at an alarming rate in Sierra Leone.

The Sierra Leone government announced on Saturday that two doctors had died the previous day, one in the Hastings clinic and another at the British-run Kerry Town Ebola treatment centre a short drive from Freetown.

Sierra Leone has recorded around 1,600 Ebola deaths this year and has registered a worrying surge recently of cases in its western area, including the capital.

The virus is spread through contact with bodily fluids, meaning healthcare workers are particularly at risk, and more than 100 have lost their lives in Sierra Leone.

The outbreak has left more than 6,000 people dead worldwide since December 2013, nearly all in Sierra Leone, Guinea and Liberia.

President Ernest Bai Koroma announced on Sunday a summit on Ebola, gathering the leaders of Sierra Leone, Guinea, Liberia and Ivory coast, would take place in the eastern city of Kailahun “very soon”.

“We are not out of the woods yet but the mechanisms we have put in place will definitely bear fruit in time,” he said.