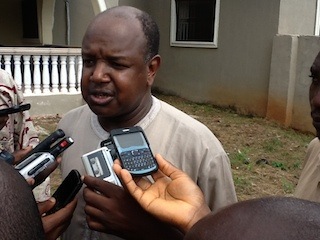 Senator Atiku Bagudu, a businessman, has enacted a political magic, by winning the All Progressives Congress governorship primary for Kebbi State.

Bagudu is barely 24 hours old in the APC, having joined the APC on Saturday, with 10 members of the state House of Assembly.

At the moment, Bagudu represents Kebbi Central District on the platform of the Peoples Democratic Party (PDP).

And just like he predicted, he clinched the ticket with a massive majority.

The APC gubernatorial Electoral Officer, Alhaji Umar Dambo, announced that Bagudu scored 2,625 votes ahead of other contestants to emerge the flag bearer for the 2015 elections.

The stunt Bagudu performed in Kebbi, is similar to the amazing exploits of former secretary to the Akwa Ibom government, Umana Umana, who also shoved aside Senator John Udoedehe, to win the APC governorship primary on Friday.