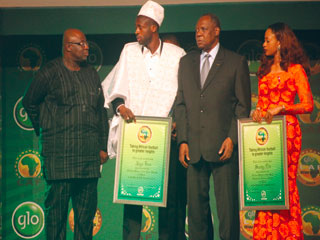 Globacom, title sponsor of the annual Glo-CAF Awards, has launched two new promos ahead of the 2014 edition of the awards designed to celebrate Africa’s most successful football icons. The event will be held in Lagos, Nigeria on 8 January, 2015.‎

The promos include the Reserve your seat at the Awards Event and Predict the Winners and Win Big.

Reserve your seat at the Awards Event will offer Glo subscribers who recharge up to a total of N5, 000 or more in December 2014 an opportunity to secure a seat as one of the company’s special guests at the event. Alternatively, any customer who buys a smart phone from any Gloworld Shop will stand the chance of enjoying a similar opportunity.

According to Globacom, the Glo-CAF Awards is the biggest night in African football, a gathering where the biggest names in the world of business, politics and showbiz meet with the stars and legends of the beautiful game in this all-important event.

Globacom said it has lined up series of world-class entertainment to delight guests at the Gala night where they meet and interact with the crème de la crème of African football at Eko Hotel & Suites, Lagos. Whoever secures an invite to the event will enjoy every moment of the night.

The company, in a press release said, “our loyal subscribers have stood solidly behind the Glo brand over the years. This, therefore, is another golden opportunity to appreciate and reward them for their patronage.”

In addition to the Reserve your seat at the Awards Event, Globacom has developed another promo on the Glo-CAF Awards to empower Nigerians with mouth-watering prizes. This is called the Predict the Winners and Win Big. It is an SMS-based promotion that will run between now and 8th January, 2015.

According to Globacom’s Head of VAS, Nagasai Viswanath, customers who wish to participate are required to correctly predict any of the winners in three Glo-CAF Awards categories: African Footballer of the year, African Female Player of the year and African Coach of the Year. Globacom urged subscribers to send the names of their choice nominees to 55055 via SMS at the cost of N100 per SMS. Multiple entries will increase participants’ chances of winning, said Viswanath.

He explained that prizes to be won include Mercedes Benz G Wagon, 10 return tickets to Old Trafford, home ground of Manchester United, and over 1,000 prizes of free airtime of N10, 000 each.

He further said that the promotions are coming after a massive nationwide network enhancement and modernization project that has seen major components of the network swapped with state-of-the-art equipment. As a result of the expansion and modernization, he remarked that the capacity of the Glo network and quality of service have significantly been boosted, thereby guaranteeing Globacom subscribers pleasurable experience on the network during and after the promotions.

CAF recently released the names of top 5 players, including two Nigerians shortlisted for the 2014 African player of the year award category.

It will be recalled that the telecoms company, within the week, launched Glo Overload and Glo Allawee promos to empower its customers to enjoy pleasurable experiences on the network.

While Glo Overload enables its subscribers across Nigeria to instantly get 200 percent bonus airtime, 200% bonus data and an opportunity to be 100 times richer every time they recharge with N200 or more, Glo Allawee gives new subscribers a whopping N18,000 naira worth of free airtime.