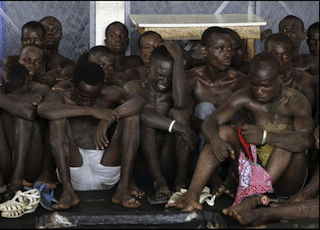 File Photo: Inmates in a prison

Mr Panaf Olakanmi, a legal practitioner with Panaf Chambers in Abuja, on Monday advised the Federal Government to carry out thorough reforms of Nigerian prisons to forestall incessant jailbreaks.

Olakanmi made the call in an interview with the News Agency of Nigeria (NAN) in Abuja following a jailbreak at Minna Prison on Sunday.

“Prisons should be like a rehabilitation home or a remodeling home that prisoners go to as raw materials and come out as rehabilitated persons.

“We should design prisons that prisoners get to and come out better. We should have prisons that people can engage in one trade or the other to contribute to the society,” he said.

Olakanmi also cited the recent jailbreak in Ado-Ekiti, describing the development as alarming.

Olakanmi said in other countries, convicted criminals were given opportunity to have some tutorials on security or acquire education in other fields.

According to him Robert Mugabe, the Prime Minister of Zimbabwe, had four degrees, including a PHD in the prison.

He said Nelson Mandela, a former President of South Africa, who also stayed in the prison for almost 27 years, equally came out fit enough to become the president and one of Africa’s greatest rulers.

Olakanmi said Nigerian prisons should be reformed to make prisoners come out as better citizens.

He suggested that Nigerian prisons be adequately equipped with the necessary infrastructure and facilities in line with global best practices to forestall jailbreaks and other criminal acts.

Olakanmi said jailbreaks often put the lives of judges and lawyers on the line as escaped convicts had the tendency to carry out vendetta against those they believed put them behind bar.