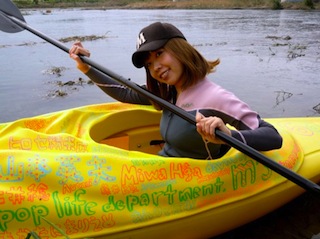 A sex shop owner arrested along with a artist who makes objects shaped like her own vagina has been released from Japanese police custody, lawyers said Monday, after the courts refused to extend her detention.

In a case which sparked accusations that Tokyo’s police are overbearing and out of touch, Minori Watanabe, 44, also a writer and feminist activist, was freed after prosecutors failed to persuade a judge to sanction extended questioning.

Watanabe, whose boutique is aimed at women, was arrested last week for “displaying obscene goods in her shop window”.

Her lawyer Ichiro Muraki said she was freed on Saturday after two days’ detention, in a rare case of a court siding with a suspect.

Detectives arrested Watanabe — who is known in Japan under the nom-de-plume Minori Kitahara — on the same day as they took artist Megumi Igarashi into custody for the second time this year on charges relating to a genital-shaped kayak she made on a 3D printer.

Igarashi was still being held on Monday, with her defence lawyers waiting for judges to rule on whether she should remain behind bars.

“She is banned from receiving visits except from her lawyers,” her attorney Takeshi Sumi said.

“She is being accused of different but similar counts from the last time, which all date back before her previous arrest” in July, he said.

“It is baffling why police had to arrest her again.”

The present charges relate to three counts of distributing “obscene” data — namely CD-Roms containing computer code for a 3D printer to make the copies of the canoe.

Igarashi was arrested in July for trying to raise funds online to pay for the vessel’s construction, but was released days later following a legal appeal and after thousands of people signed a petition demanding her freedom.

“Police suspended a decision whether to indict her or not for five months and came back to arrest her again over different counts,” the lawyer said.

Japan’s pornography industry is large and varied, with something for almost everybody. However, obscenity laws still ban pictures of actual genitalia, which normally appear pixellated or behind black spots.

“Since the arrest last time, she has been vocal in her cartoons and speeches criticising police. They seem to have arrested her again to safeguard their integrity,” Sumi said.

If convicted of distributing or holding obscene materials for the purpose of selling, Igarashi could receive up to two years in jail and/or a fine of as much as 2.5 million yen ($21,000).