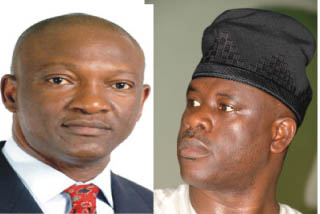 There was tight security at Yard 158, Plot 34, Oregun Road, Lagos, southwest Nigeria, on Monday as delegates of the Peoples Democratic Party, PDP, converged there to elect a candidate to represent the party in next year’s governorship election in Lagos.

The battle line appears drawn between two leading aspirants, Senator Musiliu Obanikoro, the erstwhile minister of State for Defence and Mr Jimi Agbaje, the candidate of the Democratic Peoples Alliance (DPA) in the 2007 governorship poll in the state.

The atmosphere was charged as security personnel were deployed to maintain peace and order at the venue.

An amoured tank and several Rapid Response Squad pick up vans were deployed at the entrance of the venue to keep street urchins at bay.

Anti-bomb experts were also on ground to screen delegates and people entering the venue.

The accreditation of delegates which was to commence between 9am and 11 am was yet to commence as at 1pm as delegates for the election were locked out of the premises by security personnel.

At least 900 delegates are expected to vote at the primary to select a candidate for the party among the 7 contesting for the position.

Journalists at the primaries complained bitterly for been kept under the scorching sun for over four hours due to none availability of press tags on time.

None of the governorship aspirants was at the venue as at the time of filing this report.

The party chairman, Tunji Shelle, Chief Olabode George, Senator Adeseye Ogunlewe and other party chieftains were equally not at the venue.