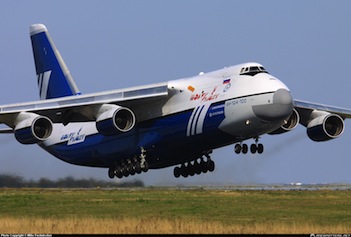 The Nigerian authorities on Sunday said they had detained a Russian cargo plane carrying military equipment in the north Nigerian city of Kano.

The country’s defence chiefs announced on Twitter that the Antonov aircraft was held pending an investigation into its provenance and what it was carrying.

A tweet by the Defence HQ read: “An Antonov Cargo aircraft carrying some military hardware was arrested at the Mallam Aminu Kano International Airport in the early hours”

“Investigation is ongoing to determine the content and origin of the aircraft. Further details will be made as soon as the investigation is completed”.

Its unscheduled arrival early on Saturday stoked speculation in Nigeria’s media, given long-standing claims that Boko Haram has had outside support in its five-year insurgency.

The issue has become a political issue for opponents of President Goodluck Jonathan, who has been accused of not doing enough to stop the Islamist violence, which has left more than 13,000 dead since 2009.

Russia’s embassy in Abuja also initially denied that the plane was theirs, although later confirmed that it was and that it was carrying French military equipment.

AFP understands that the 18 Russian crew members and two French military personnel on board were not arrested but questioned about alleged discrepancies in the cargo manifest and flight plan.

Spare parts and maintenance items were also being transported on the flight from Bangui, in the Central African Republic, to Chad’s capital, N’Djamena.

The hardware was being transferred as France winds down its military operations in the CAR and reinforces its anti-Islamist regional operation, codenamed Barkhane, in Chad.

The Antonov 124, which had Nigerian diplomatic clearance, diverted to Kano 710 kilometres (441 miles) due west because of heavy air traffic in the Chadian capital, said Champagne deI mean, Labriolle.

Checks were made because of the aircraft’s nationality and the nature of the cargo and the French Embassy in Abuja supplied information, he said in an emailed statement.

“The Nigerian federal and airport authorities, being satisfied with the documents and the genuine character of the flight, have announced that the plane will be authorised to pursue its flight to N’Djamena,” he added.

“Contrary to some press reports, there was absolutely no weapon and no ammunition on board the aircraft.”