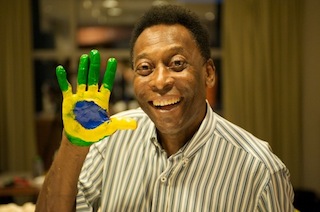 Brazilian soccer legend Pele has recovered well from his kidney ailment and can leave the hospital on Tuesday, the Sao Paulo clinic that has been treating him for two weeks said Monday.

“He is doing well clinically and does not have any signs of infection. Considering his good recovery, his medical team has scheduled his leaving hospital tomorrow,” a statement from the Albert Einstein clinic read, adding Pele would speak to reporters Tuesday at 12:30 pm (1430 GMT).

The announcement comes three days after the 74-year-old Pele publicly thanked well-wishers for their support in a video posted to Facebook that also featured him strumming a few tunes on his guitar during a visit from members of his family and a girlfriend.

Pele was hospitalized on November 24 with a suspected urinary tract infection requiring antibiotics.

Some Brazilian media reported Pele had septicemia, a blood infection, after he initially failed to respond to treatment.

But the clinic stopped renal assistance three days later and then moved Pele to semi-intensive care after extensive tests as his health began steadily to improve.

Pele has only one kidney after the other was removed following a rib injury he suffered while playing for the New York Cosmos in the 1970s, his agent Jose “Pepito” Fornos told AFP.

Pele underwent kidney stone surgery in the same clinic on November 13 and was discharged two days later before returning complaining of abdominal pain.

A posse of journalists have spent days camped outside the hospital to report on the health of the man named athlete of the 20th century by the International Olympic Committee in 1999 and who helped Brazil to world titles in 1958, 1962 and 1970.

Widely regarded as the best footballer ever, Pele made his name with Brazil team Santos and won his first World Cup at just 17, scoring twice in the final win over hosts Sweden.

He was injured early on in 1962, when Brazil retained the trophy, but scored in Brazil’s 1970 final win over Italy.

Pele, who ended his career with a spell in the then-embryonic US league with the New York Cosmos, scored 77 goals in 91 games for Brazil and 1,281 in his career.