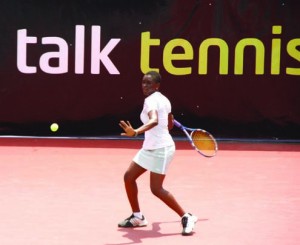 Runner up in the Women’s Singles at the recently held Governor’s Cup Lagos Tennis Championship, Nigerian Sarah Adegoke began her campaign in this year’s Dala Hard Court Tennis Championship in Kano on a bright note as she crushed her first round opponent, Kelechi Njoku in straight set of 6-0,6-1.

Adegoke, current Nigeria’s number one female player, who reached the semi final stage of the just concluded Nigeria Ports Authority, NPA National Tennis Open in Abuja showed that she still has what it takes to dominate the domestic scene by hitting series of winners against her opponent in the match played yesterday.

“I had a very good game and hopefully, I will play better if I meet stronger opposition,” said the 17-year-old, who won the Ekiti Governor’s Cup Tennis Championship in June.

Thomas Otu advanced at the expense of Bala Musa 7-5, 6-3, while Sunday Emmanuel was stretched by Yakubu Hassan, a wildcard benefactor before he went on to win the game by 7-6 (5), 6-3. Joseph Imeh triumphed over Abubakar Tswako 6-2,6-2 in a battle of junior players, while old war horse, Sunday Maku beat  Aliyu Bashir 6-1, 6-2 to progress to the next stage.