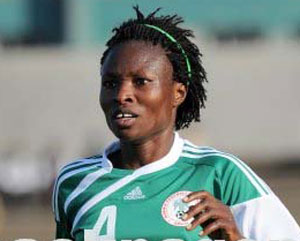 As the Super Falcons get set to take on the world’s finest at the FIFA Women’s World Cup next year, veteran Falcons player, Perpetual Nkwocha has revealed that the team still lacks a lot of key ingredients to succeed on a global platform like the World Cup.

The 38-year old and four-time African Women Footballer of the Year award winner told www.footballlive.ng that she is hopeful with the current crop of players, the team will deliver on the big stage.

“We’re still lacking a lot of things, but I believe if we can prepare this time, early enough, with the current crop of players we have, this World Cup will be a good experience for us.”

She predicted a good outing for the tough Ivorians in time to come. “Ivory Coast are one of the most improved team on the continent. I was impressed or perhaps shocked about them. In another two years they’ll do well,” she said.

Meanwhile, Super Falcons striker Asisat Oshoala has said her side has the capacity to progress out of Group D.

“I was expecting any (opposition) because it’s called draws – anything can happen. The teams, USA, Sweden and Australia, are no threat to us all,” Oshoala told Goal.