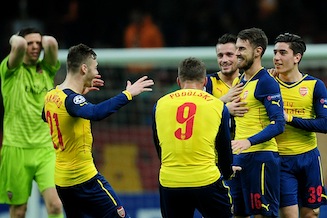 Aaron Ramsey got Arsenal back on track with a brilliant double in Tuesday’s 4-1 win at Galatasaray, but there was still frustration for under-fire boss Arsene Wenger as the Gunners were unable to clinch top spot in Champions League Group D.

Although Wenger’s side travelled to Istanbul already assured of their place in the last 16 of Europe’s elite club competition, they were sorely in need of a morale-boosting victory following the vicious backlash from Saturday’s 3-2 defeat at Stoke.

Wenger had been verbally abused by angry Arsenal fans when he boarded the club’s train home from Stoke, while sections of the Gunners fanbase had fought among themselves at the Britannia Stadium as arguments about the Frenchman’s perceived failings boiled over.

In the circumstances, Wenger would have loved to combine a win in Turkey with a defeat for group leaders Borussia Dortmund against Anderlecht.

But, somewhat inevitably given the downbeat tone of Arsenal’s campaign, Dortmund got the point they needed against the Belgians and Arsenal were forced to settle for second place despite a dominant display which saw Ramsey score twice in the first half, including a stunning long-range effort, after the opener from Lukas Podolski, who wrapped up the points in the final seconds.

Finishing second means Arsenal are likely to face tougher opponents in the last 16, which has been their regular exit point from the tournament in recent seasons, so Wenger’s critics are unlikely to be silenced for long by victory over Galatasaray, who got one back through Wesley Sneijder.

“There’s a little bit of frustration that we have finished runners-up, but we knew at half time we needed to score six goals without conceding,” Wenger said.

“Unfortunately it wasn’t enough, but we finished with 13 points and did the job tonight.

“We came out strong and that’s what I wanted from these players.”

It quickly became apparent that the Gunners would have more than enough firepower to overwhelm Galatasaray as Podolski opened the scoring in the third minute at the Turk Telekom Arena.

An incisive build up involving Alex Oxlade-Chamberlain and Ramsey ended with Podolski taking the Wales midfielder’s pass and firing a fierce, rising shot high into the roof of the net from a tight angle on the left side of the penalty area.

Seemingly determined to erase the Stoke defeat from their minds as fast as possible, Arsenal continued their blistering start to double their lead in the 11th minute.

Podolski won possession in midfield and Oxlade-Chamberlain drove forward to slip a pass to Ramsey, who guided a low shot past Sinan Bolat into the bottom corner.

There was a real vibrancy about Arsenal’s play and they sliced through the Turkish defence again when Oxlade-Chamberlain’s clever back-flick set up Podolski for a strong strike that cannoned back off a post.

Such was Arsenal’s dominance that they looked like scoring with every attack and their sky-high confidence was there for all to see when Ramsey struck in the 29th minute.

An Arsenal corner was cleared to Ramsey 30 yards from goal and he unfurled a majestic left-foot volley that raced beyond Bolat’s despairing dive into the top corner.

It was such a perfect strike that even Ramsey seemed a little caught by surprise as he celebrated arguably the best goal of his career by laughing out loud.

With the victory all but sealed, Wenger handed a European debut to Gideon Zelalem, a 17-year-old German midfielder, and a first-team debut to Ainsley Maitland-Niles, a 17-year-old English midfielder, in place of Ramsey and Mathieu Flamini at the interval.

But soon after half-time, news filtered through that Dortmund had taken the lead against Anderlecht and Arsenal were content to go through the motions before Sneijder’s 88th minute free-kick gave Galatasaray the slenderest of consolations.

That sparked Arsenal back into life and Podolski ran clear to slot home the fourth with virtually the last kick of the match.