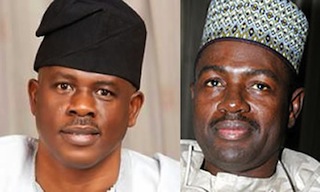 Five out of the seven ministers who resigned from the President Goodluck Jonathan ‎cabinet to contest in the just concluded primary elections under the People’s Democratic Party (PDP) have been defeated, an indication that federal might is not always enough for grassroots politics.

‎Apart from Rivers State, where Wike emerged as the PDP gubernatorial candidate, five ministers have lost their governorship bids. The seventh minister, Ishaku awaits his fate in the Taraba state governorship primary which is yet to hold.

Former Health Minister, Professor Onyebuchi Chukwu was defeated in Ebonyi State‎ by Engr. Dave Umahi while Maku, the ex-Information Minister was defeated in Nasarawa State by a businessman Yusuf Agabi, who polled 214 against 160 votes scored by Maku.

The first runner up, Uche Ogah polled 103 votes, while the former labour minister managed to muster 33 votes to come a distant second runner up!.

In Lagos, the ex-Minister of Defence, Musiliu Obanikoro was defeated by Jimi Agbaje who recently joined the PDP. Obanikoro claimed the election was rigged and has vowed to lodge an appeal with the party’s appeal committee.

Former Minister of state for aviation, Samuel Ortom came third in the governorship primary held in Benue state. It was won by Terhemen Tarzoor, the former speaker of the State House of Assembly with 517 votes. Deputy governor, Steven Lawani, came second with 311 votes, while Ortom got 111 votes, followed by former Minister of State for Niger Delta, Sam Odeh with 48 votes.

In the mean time, Darius Ishaku, a minister for Niger Delta, has been picked, by some interest groups as a consensus candidate for the Taraba State governorship primary. He will face former acting governor, Garba Umar in the election which is yet to hold.