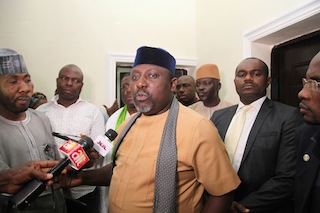 Governor Rochas Okorocha of Imo state has said he is sure of victory as his party conducts its presidential primaries at the Teslim Balogun Stadium in Lagos state on Wednesday.

Okorocha is up against four other aspirants, they are, former Head of State, Major General Muhammadu Buhari; former vice president of Nigeria, Atiku Abubakar; Governor of Kano, Rabiu Kwankwaso and Sam Nda-Isaiah, founder of Leadership newspaper.

In a tweet on his page the optimistic Okorocha wrote: “I am strong and confident. I am set and ready. I am out and moving. I am sure with faith in God that I shall emerge victorious today.”

Nigeria’s main opposition party, APC has announced that 8,000 delegates are expected to elect a presidential candidate for the party at next year’s general election.