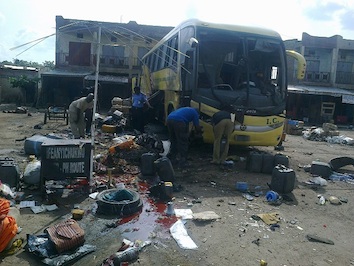 A blast ripped through a busy textile market in the north Nigerian city of Kano on Wednesday, the police and a trader said.

The explosion happened in the Kantin Kwari market, which is typically packed with crowds of traders, shoppers as well as heavy traffic.

“I heard a huge sound coming from the back of my shop along Unity Road. I just closed the shop and tried to leave because it’s not safe,” trader Nura Sadiq told AFP.

“It is true. There has been an explosion at the Kantin Kwari market,” added Kano police spokesman Musa Magaji Majia. “We are on our way now.”

There was no immediate indication of deaths or injuries from the authorities in the city, which was hit on November 29 by a suspected Boko Haram suicide attack at the city’s central mosque.

Two bombers blew themselves up and gunmen opened fire on worshippers, killing at least 120 and injuring 270 others in an attack apparently targeting the influential Muslim Emir of Kano.

The emir, Muhammad Sanusi II, had previously called for civilians to bear arms and defend themselves against the militants, who have been fighting for a hardline Islamic state since 2009.

Kano, the largest city in the north, has been a repeated target for the militants, who have in recent weeks sought to attack locations outside their northeastern heartland.

On December 2012, four people were injured when a bomb went off outside a mosque near the Kantin Kwari market, which is northern Nigeria’s largest for textiles.

That came two years after the market was razed by an overnight fire. More than 500 shops and hundreds of stalls owned by Nigerian, Indian, Chinese and Lebanese traders were destroyed with their goods.