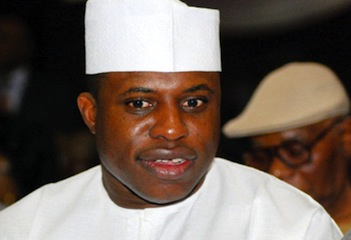 All may not have been heard of the crisis rocking the Peoples Democraic Party (PDP) in Ogun state as the former Speaker of the House of Representatives, Dimeji Bankole today declared that he is still in the race for the governorship seat of Ogun in 2015.

Bankole stated this just as the former chairman of the House of Representatives Committee on Communication, Hon. Dave Salako criticized the conduct of the PDP primary in Ogun on Monday.

It would be recalled that the state chapter of the party had on Sunday conducted the governorship primaries despite orders from the National Working Committee that the election should not continue.

The state chapter of the Peoples Democratic Party had on Tuesday disagreed with the party’s National Working Committee that all the primary elections conducted in the state so far have been nullified.

The Ogun PDP had contended that its primaries and congresses which culminated in the election of the former governorship candidate of the Peoples Party of Nigeria, PPN, in the 2011 election, Prince Gboyega Nasir Isiaka as its standard bearer, remained valid and authentic.

But Bankole said contrary to the action and position of the State Executive Committee of the Peoples Democratic Party in Ogun, he is still a governorship aspirant.

The former speaker spoke through a group, Dimeji Bankole Movement (DBM) in a statement signed by its Public Relations Officer, Hon. Kayode Akintunde, copy made available to our correspondent in Abeokuta, the state capital.

The statement claimed that a decision was last Sunday reached in Abuja at a meeting between the PDP National Working Committee led by its National Chairman, Alhaji Adamu Mu’azu and Bankole, ex-governor Gbenga Daniel and Prince Buruji Kashamu where it was resolved that last Monday’s primary be suspended until certain issues had been sorted out.

Expressing shock at last Monday’s conduct of the primary election which produced Isiaka as the PDP governorship standard bearer, the group accused the organisers of working against the interest of the party in the 2015 elections as well as planning to cause confusion and disaffection between the people of Ogun West and central senatorial districts.

“The Dimeji Bankole Movement has expressed shock over the purported primary elections conducted by some leaders in the Peoples’ Democratic Party, PDP, Ogun State despite the decisions reached on Sunday with the leadership of the party in Abuja.

“The meeting which had the National Working Committee, led by Alhaji Adamu Mua’zu and Rt. Hon Dimeji Bankole, Otunba Gbenga Daniel and Prince Buruji Kashamu in attendance where certain decisions were taken.

“It was resolved at the meeting that Monday’s gubernatorial primary should be put on hold pending the time all issues are resolved. All the purported primaries earlier conducted declared null and void. That no member should query or challenge the decision of the NWC in the court and finally that the party will make a decision that will be fair and acceptable to the three leaders by Monday.

“It is however unfortunate that despite the agreement reached on the said date, some people still went ahead to conduct the primaries. Their decisions have clearly showed that they are invariably working for the downfall of the party in the forthcoming polls as well as cause confusion within members of the party and disaffection between two political districts in Ogun State.

“We use this medium to call the attention of the party members that Senator Isa Mohammed led Electoral Panel for Ogun State (Returning Officer for Ogun State governorship Elections) has not been mobilized by the Party’s headquarters.

“The Dimeji Bankole Movement wish to commend the National Working Committee of our great Party for standing by the truth and promoting rule of law in the administration of the Party. We wish to state that Dimeji Bankole Governorship Project is still very much on course. However, we appeal to our teeming supporters and party followers to remain calm,” the statement read.

The state chairman of the party could not be reached and some of the party leaders who our correspondent contacted declined comment on the matter.