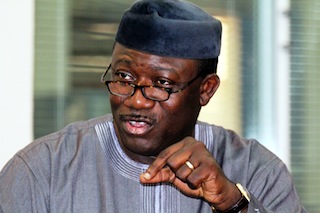 All Progressives Congress national convention committee chairman, Dr. Kayode Fayemi, has described the special convention of the Peoples Democratic Party as a coronation and not convention.

The immediate past governor of Ekiti state said this at the ongoing third national convention of the APC, holding at the Teslim Balogun Stadium, Lagos, southwest Nigeria, adding that, the event was undemocratic as it was just a ruse to endorse President Goodluck Jonathan.

Fayemi while speaking to journalists, said that among all the political parties in Nigeria, APC was the only party holding an open and transparent presidential primary.

“You can see that our primary is very transparent and is offering every aspirant a level playing field unlike the PDP, which is holding a coronation. Theirs is just an event to put a crown on Jonathan and that is not a convention,” he said.