2015: I will not fail Nigerians, says Jonathan 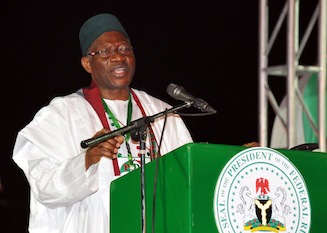 President Goodluck Jonathan on Thursday accepted his nomination as the PDP Presidential Candidate in the 2015 election with a pledge that he would not fail Nigerians.

Speaking after delegates to the PDP National Convention had nominated him, the president promised to give his all to ensure that the living standard of Nigerians improved.

Jonathan said that his nomination as the PDP Presidential candidate exemplified the party’s determination to ensure that democracy in Nigeria yielded the desired benefits to Nigerians.

He assured all PDP members that all complaints and grievances within the party would be amicably resolved.

According to him, the country’s fight against corruption is on course and will be won.

He said the government would ensure that no child lacked basic needs and that no woman died from child birth.

The president said the observance of human rights was the cornerstone of his administration, adding that no Nigerian would be persecuted for holding a contrary view.

He restated that Nigeria was undergoing some transformation being progressively enjoyed by the people, adding that many of the projects being showcased by those who defected from PDP were actually initiated by the party.

He enjoined the opposition to be honest in its campaigns and should be devoid of propaganda and half thruth.

Jonathan had earlier captured 2,812 votes cast at the convention to emerge as the party’s candidate for the 2015 presidential election.

The party had also amended its constitution to address the issue of tenure in the party’s administration.