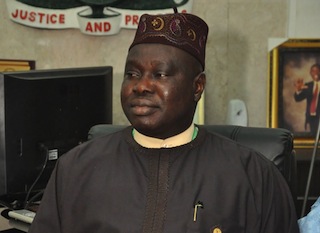 The Speaker of the Lagos State House of Assembly, Adeyemi Ikuforiji, on Wednesday expressed the hope that the presidential candidate of the All Progressives Congress (APC) would be the next Nigerian President.

Ikuforiji expressed the hope at the APC presidential primary election going on in Lagos.

The election began on Wednesday and will end on Thursday.

NAN reports that delegates at the election have continued to hold discussions on who should fly the party’s flag in 2015.

Ikuforiji told newsman at the Teslim Balogun Stadium, venue of the election, that the party hoped to produce the next Nigerian president.

On a speculation that some aspirants might have withdrawn from the race, Ikuforiji said that it would be a good development.

“If the APC ends up having one aspirant, it will be a good omen.

“APC is a party with ideas and men of integrity; we are desirous of moving Nigeria forward.

“If aspirants step down, it means they have seen something better in the other aspirant, and it is a show of patriotism,” the speaker said.