City and Barca get wonder strikes to progress 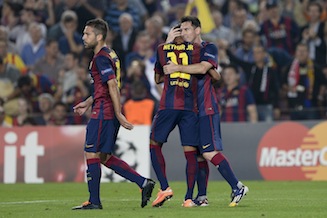 A memorable 50th appearance in the Champions League for Samir Nasri helped Manchester City into the last 16 on Wednesday night, while a Neymar stunner set Barcelona on the way to topping their group.

Nasri’s first goal of the season — also his 50th for an English club — and an assist for Pablo Zabaleta secured a 2-0 win for City away against Roma and saw them qualify for the knockout stage at the expense of the Italian side in Wednesday’s final round of group games.

Meanwhile, Group E winners Bayern Munich’s 3-0 victory at home to CSKA Moscow gave Roma the consolation of a spot in the Europa League.

Neymar’s superb goal — a curling right-footed effort from outside the area before half-time — put Barcelona into the lead against Paris Saint-Germain in a game the Catalans had to win to pip their opponents to top spot in Group F.

Zlatan Ibrahimovic had given PSG the lead, but Lionel Messi equalised and, after Neymar paved the way to victory, Luis Suarez added a third — his first at the Camp Nou since his move from Liverpool — in the second half.

Barca’s victory means they can surely now expect an easier tie when the draw is made on Monday, while the result ended PSG’s record of being the only unbeaten side left in the major European leagues this season.

Germany’s Schalke 04 were the other qualifiers on the night, their 1-0 win away at Maribor thanks to 19-year-old Max Meyer’s 62nd-minute goal, sealing their place as rivals Sporting Lisbon went down 3-1 against Group G winners Chelsea.

Schalke’s qualification makes it the second successive season that all four German representatives have made it through to the last 16, Borussia Dortmund and Bayer Leverkusen also having progressed.

Manchester City made light of missing three key players — leading scorer Sergio Aguero and captain Vincent Kompany were injured while Yaya Toure was suspended — as the mercurial Nasri showed his positive side.

Nasri’s goal was worthy of his 50th appearance in the competition, as he created space for himself and cracked in a stunning right-footed effort from just outside the box that beat Morgan de Sanctis, hit the post, and went into the net on the hour mark.

Nasri then turned creator with just under five minutes remaining as his pass set up Pablo Zabaleta for a well-taken second City goal and the Argentinian’s first ever in the competition.

City manager Manuel Pellegrini, who has guided them to six successive wins, was delighted with the manner in which his players had handled the pressure.

“I had a lot of trust in what we could do,” said the Chilean.

“I said I didn’t want to talk about players not in the team. This team deserve a little more credit than the press always give us.”

His Roma counterpart Rudi Garcia was disappointed his team had fallen just short of reaching the knockout stage for the first time since the 2010/11 season.

“We’re disappointed with the defeat, especially as we started the match off so well,” said a resigned-looking Garcia.

“Efficiency is a trademark of great teams and they were a lot more efficient than us in that respect tonight.”

Despite Ibrahimovic’s early goal — his first against the club he spent a season with in 2009/10 — Barcelona were worthy of their victory and Messi managed to mark the occasion with another landmark goal to bring the sides level.

The score same him equal the record mark for most goals in all European competitions. The Argentine now has 76 European goals, putting him level with former Real Madrid star Raul, with Cristiano Ronaldo one behind.

Barcelona coach Luis Enrique was pleased with the performance and said they had achieved their first target.

“It would be a lack of respect if I said I want this team or that one in the draw (on Monday),” he said.

“We have fulfilled our part of the contract by finishing first. And the team that draws us will undoubtedly not be happy.”

PSG coach Laurent Blanc was downcast about letting slip the chance to top the table and nervous about the draw.

“It is a disadvantage to finish second. In a group with FC Barcelona, you can expect to be in a real battle to finish first. We couldn’t do it, and now we impatiently await the draw,” said Blanc.