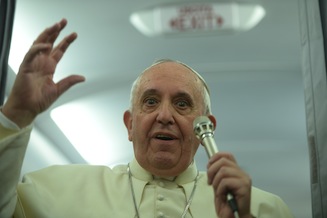 Pope Francis declared recently in his regular weekly address at St. Peter’s Square that animals go to heaven. He made the statement while trying to comfort a boy who was upset about the death of his pet dog.

Quoting several biblical passages as evidence that animals go to heaven, Pope Francis said, “The holy scripture teaches us that the fulfillment of this wonderful design also affects everything around us… what lies ahead… is therefore a new creation… It is not an annihilation of the universe and all that surrounds us. Rather it brings everything to its fullness of being, truth and beauty.”

The 77-year-old pontiff then concluded: “One day we will see our animals again in eternity of Christ. Paradise is open to all God’s creatures.”
Reacting to Francis’ statement, the Italian newspaper Corriere della Sera wrote optimistically that the pontiff had effectively declared an expansive “hope of salvation and eschatological beatitude to animals and the whole of creation.”

While the declaration from the controversial pontiff might have brought consolation and relief to animal-loving Catholics who have mourned the loss of a pet, it probably caused Church conservatives more hand-wringing over their fears about their pope’s escalating “liberalism.”

Soon after Francis made the statement, the Italian company Eurolactic Italia, which produces donkey milk as alternative nutriment for babies allergic to human and cow milk, presented him with two donkeys, Thea and Noah, as Christmas presents.

Media reports quoted an official of the company, Pierluigi Christophe Orunesu, saying that Francis confessed that he loves donkey’s milk having consumed it as child. Thea and Noah would no doubt be in heaven to provide the pontiff a constant supply of milk.

Francis’ declaration that “heaven is open to all God’s creatures” could be interpreted by the theologically naive only as a statement expressing the sincere feelings of an animal lover. But it is one sufficient to spark an acrimonious debate till kingdom come among church theologians who have hitherto assumed that the privileges of heavenly beatitude are reserved exclusively for humans.

The notion of animals going to heaven is one that church leaders and theologians immersed in anthropocentric biblical worldviews have apparently never given much thought to. The question of what happens to our favorite pooches and moggies after death only began assuming significant dimensions recently
with the Christianity Today, in 2012, raising the question, “Do Pets Go to Heaven?”

But soon after publication of the article, Pope Francis’ predecessor, Pope Benedict XVI, moved quickly to slam shut firmly the pearly gates of heaven against animals, declaring in the midst of his brief papal tenure, that animals are “not called to the eternal life,” and pointing out that animals are never mentioned in connection with salvation and eternal life in the Christian scriptures.

But how do we resolve the contradiction between the statements of two equally infallible vice-regents of God on Earth?

Benedict’s predecessor, Pope John Paul II, is reported to have said in 1990 that “…animals possess a soul” and “in this respect, man, created by the hand of God, is identical with all other living creatures.”

However, Pope John Paul II offered no inspired papal insights into the animal hereafter, thus empowering Benedict to declare in effect, and in line with church tradition, that only humans have immortal souls.

While animal lovers quote Isaiah 11:6, which says that in the life hereafter “the wolf shall dwell with the lamb, and the leopard shall lie down with the young goat, and the calf and the lion and the fattened calf together,” others sidestep the inconvenient verse, pointing out that the bible makes it clear in Mark 16:16 that only “he that believes and is baptized shall be saved.”

In truth, the Apostles never baptized or preached the gospel to chickens, dogs and cats. Even human gentiles were granted the boon of heavenly afterlife only as an afterthought; that is, after the Jews rejected the message.

Ultimately, the notion that animals go to heaven raises a medley of theological riddles for those with the leisure to indulge in unbridled rumination over the spiritual mysteries of existence:

If animals go to heaven, do they also go to hell? Will my donkey suffer eternal damnation for that well-aimed kick at my groin, or my pitbull hellfire for attacking my toddler son? Will my hen go to perdition for cracking and eating its own egg, effectively aborting its own offspring in the womb?

What about earthworms, the bacteria in my gut, HIV and Ebola viruses that have caused untold suffering to humanity?

And where does God draw the line in the hierarchy of animal lifeforms that separates those eligible for afterlife from those not sufficiently evolved to benefit from the comforts of heavenly bliss?

On the contrary, do non-human life forms have an assured automatic ticket to heaven for lacking a moralizing intellect?