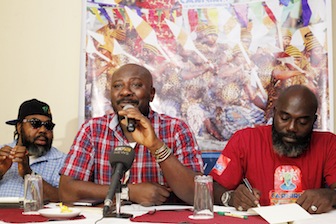 All is now set for the 2014 edition of Carniriv: The Port Harcourt carnival, annual flagship tourism and cultural export project of the Rivers State Government which is expected to attract over half a million carnival lovers into Port Harcourt, the bustling capital city of Rivers state.

The global carnival is scheduled to run from the 12th – 20th December, Carniriv: arguably the biggest and oldest carnival brand in Africa, kicks off on Friday with the debut Miss Carniriv pageant which is designed to crown the official face of the carnival in a contest that attracted close to a hundred entries from within and outside the state.

A sneak peak of the profile of some of the finalist indicates that the ladies are beautiful indeed!

In an interview with journalists, Director General and CEO of the Rivers State Tourism Development Agency, Dr Sam Dede is optimistic about the state of preparedness for the carnival: “We have pulled out all the stops to ensure that our guests enjoy every minute spent in Port Harcourt for Carniriv 2014. We are working assiduously with security bodies, health officials and the entire hospitality sector to guaranty safety of lives and utmost satisfaction during the duration of our carnival.”

Dede, a seasoned academic and actor, also told journalists that out of the original thirteen events slated for the carnival only one, the Kids Carnival, will not hold as planned. He explained that the outbreak of the Ebola Virus Disease earlier in the year led to an extension in the school calendar, thereby foreclosing the possibility of hosting the event when school was still in session. He was quick to point out that the carnival will witness an opening ceremony like no other on Monday the 15th while the closing ceremony holds on Saturday 20th at the Carnival Village, will be a most befitting climax to the carnival.

“Every promise we made as far as the carnival is concerned will be met and we owe this to the support and exemplary leadership of our governor, His Excellency, Honourable Rotimi Amaechi who, for instance, has made it possible for us to launch our 140 feet state-of-the-art performance stage which is the biggest of its kind in Africa. As this is his valedictory carnival outing we are going big so come expecting!”