I will govern Nigeria in line with Constitution, says Buhari 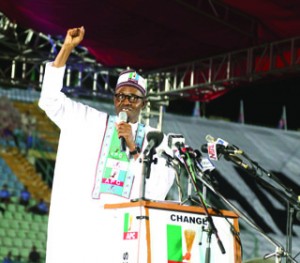 Major General Muhammadu Buhari, the All Progressives Congress (APC) presidential candidate in the February 14, 2015 presidential election, on Thursday promised to govern the country in accordance with the Nigerian constitution if elected.

Buhari made the promise at the Teslim Balogun Stadium, Surulere in his acceptance speech after being declared the winner of the party’s presidential primary.

The Chairman of APC National Convention Committee, Dr Kayode Fayemi, who declared the results of the primary, said that Buhari polled a total of 3,430 votes to defeat former Vice President Atiku Abubakar, who got 954votes.

Buhari, after being declared winner, said: “I understand there are challenges ahead. I promise that my administration will govern Nigeria in accordance with the constitution.”

He promised to put in place a government that would realise a new Nigeria and put the country on a level where it would be respected more in the international community.

The APC presidential candidate promised to give priority to agriculture, healthcare and creation of wealth as well as enhance the power of the Economic and Financial Crimes Commission (EFCC) to tackle corruption.

Buhari, who described his victory as a great triumph of democracy, called for the support of all Nigerians. “I need your support, I need your help to become the President of Nigeria in next year’s presidential election.

“I see this as an opportunity to rescue the nation from joblessness, poverty and to tackle all its challenges,” he said.

He commended the convention committee and leadership of the party for conducting a hitch-free programme, saying that the outcome of the primary was a testimony that “democracy is at work.”
Buhari also thanked other aspirants for accepting the outcome of the election and promised to work with them during electioneering.