Kenya, Nigeria to partner on security to end insurgency 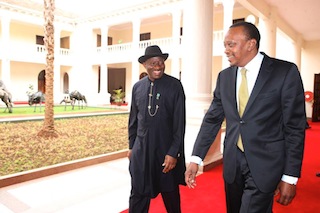 The Kenyan Government said on Thursday in Abuja it was working closely with Nigeria to tackle the security challenges currently facing the two countries.

Kenyan High Commissioner to Nigeria, Amb. Tom Amolo, told NAN that both countries signed an agreement on police cooperation when President Uhuru Kenyatta paid a state visit in May.

He said the two countries would share experiences in the area of security and work towards implementing the agreement in the first quarter of 2015.

“On the security side, we have had good discussions at the highest level of both our security networks and they have proved very valuable in providing information which have helped in addressing some of the similar security challenges our countries are going through.

“It (the agreement) hasn’t come to fruition because they (both parties) have not met and that has a lot to do with our current security challenges, Nigeria and Kenya.

“We explored the possibility of having this agreement managed at ambassadorial level but we have come to realise that will not be effective.

“I foresee, with new Inspector-General of Police of Kenya coming in, that we should look at the possibility of the first quarter of 2015; it’s in our programme.”

He pointed out that the relations between both parties flourished at the highest level, adding that, “this is required as a panacea for successful synergy.”

He, however, said it behooved on citizens of both countries to also partake in security process.

“On Dec. 12 we are turning 51, going forward; the Kenyan people are hopeful; they are united; they have been able to realise that our challenges can only be addressed if we are united as a people.

“If we look deeper into the challenges of insecurity, we realise that the Kenya people, the Nigerian people themselves have to take up the cudgels for security matters.

“It is not only the police who should be able to challenge these people; if somebody comes in your neighbourhood that you have never seen before, it is incumbent on you to raise the alarm.”