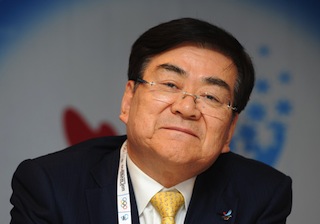 Korean Air CEO Cho Yang-Ho publicly apologised Friday after his daughter triggered public anger and ridicule by kicking the head of cabin crew off a flight because of the way she had been served some nuts.

Addressing a televised press conference, Cho apologised for his daughter Cho Hyun-Ah’s “foolish act” and suggested he should share some of the blame for not bringing her up correctly.

“I am making this apology as a father and as the head of Korean Air,” Cho said.

As well as being the boss’s daughter, Cho Hyun-Ah was a vice president of the family-run airline, but her father confirmed that she was being relieved of all her official posts.

Cho Hyun-Ah has been front-page fodder in the South Korean media since forcing a New York-Seoul Korean Air flight to return to its gate last Friday to remove the chief purser, the most senior member of the crew.

Cho, sitting in first class, took exception to the arrival of some macadamia nuts she had not asked for, and to the fact that they were served in a packet rather than a bowl.

She summoned the chief purser who, according to an earlier Korean Air statement, replied with “lies and excuses” when challenged over his crew’s knowledge of in-flight service procedures.

Cho then decided the chief purser was “incapable” and the plane returned to the gate where he disembarked, causing an 11-minute delay in arrival.

Her behaviour attracted heavy criticism in South Korea, where she was accused of being petty and arrogant, and prompted a state probe over a possible breach of aviation safety laws.

Cho was scheduled to be questioned later Friday by Transport Ministry officials.