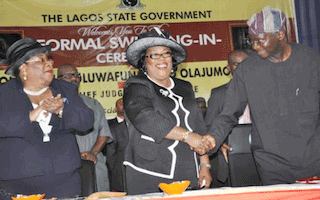 Before their new appointment, Justice Ogungbesan and Adamson were senior official of the Lagos State Ministry of Justice while Justice Adeola was a serving magistrate in the state judiciary.

The three new judges brings to 57, the number of judges in the state. While 41 of the judges are female, 16 are men.

Speaking at the ocassion, Fashola said he is confident that the new judges would dispense justice with utmost fairness and dedication.

He urged the judges to develop themselves as changing world trends are are currently redefining the way justice is been administered.

“Your quest for knowledge must be unending. The world is changing and new trends are defining how justice is dispensed across the world. You must kept yourselves updated with these trend” he charged the judges.

Fashola also assured the judges that the state government remains commitment to the welfare of the judiciary.

He said that new courtrooms located at Epe and Badagry would soon be commissioned by the state government.

In her address, Chief Judge of Lagos State, Justice Olajumoke Atilade urged the new judges to live above board and conduct themselves according to the code of conduct of judicial officers.

Justice Atilade noted that the new judges with their wealth of experience would help to ease the work load on other judges occasioned by rising population of Lagos and crave for justice.

She urged the judges to be morally upright in dispensing justice in the state judiciary.

Earlier while presenting the judges, the State Attorney General and Commissioner for Justice, Mr Adeola Ipaye noted that the State Judicial Service Commission, serving judges, members of the Nigerian Bar Association and all others have scrutinized the new judges designate and unanimously found them worthy before presenting them to the National Judicial Council, NJC.

Ipaye added that the NJC had in turn examined the candidates’ qualifications, Competence, experience and integrity before approving their appointment.

He added that the appointment of the new judges was necessitated by the increasing quest of Lagos residents for justice and the need to moderate the workload of individual judges.