2 Sentenced To Death For Stealing Fowls 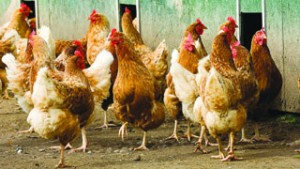 These indeed are interesting times. For stealing fowls belonging to a police officer, two men have been sentenced to death by an Osun State High Court.

The convicts, Olowookere Segun and Morakinyo Sunday were alleged to have attacked the home of Mr. Balogun Tope, a police officer attached to Divisional Police Headquarters, Okuku, Osun State, western Nigeria, in April 2010.

During the attack, the convicts came with cutlass and a dane gun.

In his judgment after hearing from the prosecution and the defence counsel, Justice Jide Falola of the Osun State High Court, Okuku sentenced the two robbers to death after finding them guilty of forcefully breaking into Tope’s house, and carting away some of his belongings.

The prosecution, led by the state Solicitor-General, Mrs. Abiola Adewemimo charged them with conspiracy, robbery and stealing contrary to Section 6(b) and 1(2)(a) of the Robbery and Firearm (Special Provisions) Act, Cap R 11 Laws of the Federation of Nigeria 2004 and Section (390)(1) of the Criminal Code Law, Cap 34, Laws of Osun State, 2002.

The prosecutor invited six witnesses and tendered several exhibits during the prosecution. She told the court that on November 13, 2010, some men were sighted around Tope’s home armed with cutlass and a dane gun, adding that two of them were arrested while the others escaped.

“They also stated that they had earlier robbed Alhaja Umani Oyewo in her house and stole broilers, eggs and kegs of vegetable oil from the house,” the state Solicitor-General told the court.

Justice Falola sentenced the accused to death for conspiracy; life sentence for robbery, and three years imprisonment for stealing. The judge also recommended that the governor can decide to commute the death sentence to 10 years imprisonment, considering the ages of the convicts.