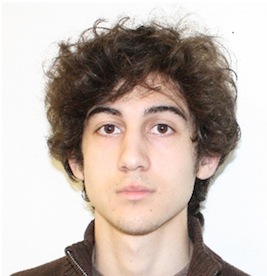 Tsarnaev, a 21-year-old Muslim of Chechen origin, faces the death penalty if convicted in federal court for what was the worst act of terror on US soil since the September 11 attacks in 2001.

Dressed in a dark pullover and light pants and with a shock of tangled hair and small beard, Tsarnaev appeared opposite two separate groups of 200 to 250 potential jurors as US District Judge George O’Toole briefly reviewed the charges against him.

“What you need is a commitment to justice,” O’Toole advised the first batch, insisting on getting a “fair and impartial” jury.

He instructed them not to discuss the case with anyone, read about it in the newspapers or consult Google or social networking sites.

Tsarnaev has pleaded not guilty to the 30 charges, including the use of a weapon of mass destruction leading to death, and carrying out an attack in a public place.

Flanked by his team of five lawyers, the youthful-looking Tsarnaev listened attentively but at times appeared tense, looking at the floor and his hands knotted during morning and afternoon sessions.

He and his older brother Tamerlan are accused of planting the bombs, which exploded 12 seconds apart on April 15, 2013, ripping through the crowd near the finish line as the race was ending.

More than 260 people were wounded in addition to the three killed. Several people lost limbs when the pressure-cooker bombs — packed with nails and other shrapnel — exploded.

Tamerlan was killed in a confrontation with police days after the attacks.

Following a manhunt that included thousands of officers, Tsarnaev was arrested a few hours after the death of his brother. He was seriously injured and found hiding in a boat in a Boston suburb.

A 12-member jury, with six alternates, will be selected from a pool of about 1,200. Each potential juror must fill out a questionnaire, the answers of which will be used by attorneys for juror elimination.

Only one survivor of the attack was seen in court Monday, but more are expected to attend once the proceedings begin in earnest.

For a death penalty case in a city where memories of the attack are still raw, jury selection is expected to be fastidious.

If Tsarnaev is found guilty, the jury must unanimously decide between capital punishment and life imprisonment.

Defense attorneys tried in vain to have the trial moved to another city, arguing it would be impossible to assemble an impartial jury in Boston, home to 656,000 residents.

O’Toole said opening arguments would begin on January 26, and the trial was expected to last three to four months.

It will be an onerous burden and will essentially suspend normal life for the jurors who are selected.

While they will be allowed to return home each evening, O’Toole threatened them with contempt if they willfully disobeyed his order not to read, watch or listen to anything about the case.

Some victims of the attack, such as Liz Norden whose two sons lost limbs, have vowed not to a miss a day.

“I want him dead,” she told AFP, saying the attacks had destroyed her life.

The prosecution will be one of the most important for the government since the Timothy McVeigh bombing trial in 1997 that ended in a death sentence.

Tsarnaev has been held in near-solitary confinement in federal prison outside Boston. He has made two appearances since his arrest, once to plead not guilty in 2013 and again at a pre-trial hearing last month.

According to the indictment, the government believes the brothers acted alone. The government portrays them as radicalized lone wolves, who learned how to make bombs from an online Al-Qaeda magazine.

A message inside the boat where Tsarnaev was found after the manhunt offers a glimpse into the possible motive behind the crime:

Tsarnaev’s family, who live in Russia, were not present and have kept a low profile since an emotional press conference just after the bombing.

His mother Zubeidat Tsarnaeva accused the US security services of needlessly killing Tamerlan while trying to capture him.

Both parents have stressed their sons’ innocence and lamented ever going to the United States.