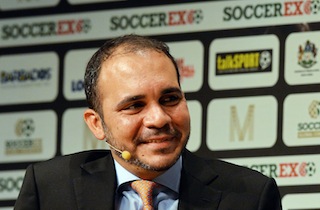 “I am seeking the presidency of FIFA because I believe it is time to shift the focus away from administrative controversy and back to sport,” Prince Ali said on his official Twitter feed.

“The headlines should be about football, the beautiful sport, not about FIFA.”

Prince Ali, a Jordanian who was elected FIFA vice-president for Asia in 2011, said he had been encouraged to stand in the May 29 election after discussing the forthcoming election with senior figures in the sport.

“This was not an easy decision. It came after careful consideration and many discussions with respected FIFA colleagues over the last few months,” he said.

“The message I heard, over and over, was that it is time for a change. The world game deserves a world-class governing body — an International Federation that is a service organisation and a model of ethics, transparency and good governance.”

FIFA has been steeped in controversy and allegations of corruption since Russia and Qatar’s successful bids to host the 2018 and 2022 World Cups.

Prince Ali, the 39-year-old son of the late King Hussein of Jordan, had been one of the most senior FIFA officials to call for the publication in full of a report last year into the winning bids.

But FIFA’s executive voted to release only an “appropriate”, edited version of top US lawyer Michael Garcia’s report into the alleged corruption and Blatter last month ruled out any suggestion that Qatar could lose the tournament.

“It would really need an earthquake, extremely important new elements to go back on this World Cup in Qatar,” Blatter said.

FIFA and Blatter have sought, without success, to silence critics of the Qatari and Russian bids, and it will now looks as if they will become the election battleground.

Prince Ali is the FIFA vice-president for Asia and founder of the Jordanian and West Asian Football Federations and is standing to prevent Blatter win a fifth term in office since the Swiss was first elected in 1998.

Frenchman Jerome Champagne had been the only other candidate to declare so far that he would stand against Blatter.

Prince Ali will need five of FIFA’s 209 member countries to nominate him as a candidate before a January 29 deadline and is believed to have plenty of support, including that of European football governing body UEFA president Michel Platini.

The Jordanian is likely to gain much of his backing from FIFA’s European federation, many of whose members have been vociferous in their objections to the victorious Qatar 2022 bid.

He will also lobby support from the Asian confederation, whose head is Bahrain’s Sheik Salman bin Ibrahim Al Khalifa, and will get further backing from the United States and Caribbean nations.