Inter snap up Shaqiri on loan from Bayern 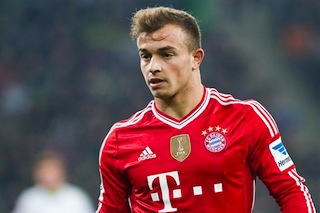 Inter Milan have signed Swiss midfielder Xherdan Shaqiri on a six-month loan deal from Bayern Munich, with the option to buy, the Serie A club announced on Thursday.

Inter have reportedly agreed to pay two million euros ($2.3m) for the 23-year-old winger with an option to buy him outright for EUR14 million ($16.5m) in June.

“Complete agreement between Inter Milan and Bayern Munich on the arrival of @xs_11official (Xherdan Shaqiri) at the +nerazzurro+, all that is missing is the signature,” the former European champions tweeted.

Shaqiri, who came up through the ranks at Basel, scored three goals for Switzerland at last summer’s World Cup but has found it increasingly difficult to break into Pep Guardiola’s Bayern side against the competition of Franck Ribery and Arjen Robben.

He becomes the second mid-season recruit for Inter after the recent arrival of German striker Lukas Poldoski from Arsenal.