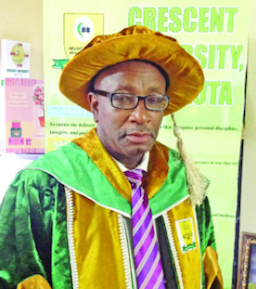 The Vice Chancellor of Crescent University, Abeokuta, Prof. Ibrahim Gbajabiamila has revealed that over 10 million Nigerians are uneducated, adding that, the country has the highest number of uneducated children in the world.

The university don disclosed that the academic standard in the country has dropped so much that the country is now being rated above the war-torn country of Somalia.

He stated this Thursday morning in Abeokuta at the grand finale of the National Association of Nigerian Students, NANS Week held at the Valley View hall, Government House, Isale Igbein, Abeokuta, the Ogun state capital.

Gbajabiamila, who was the guest speaker at the ceremony advised students to follow the path of righteousness and truth.

“The situation is critical now and the stakeholders are not doing what is needful. I want to let you know that the country has the highest number of of the children that are not educated in the world.

“Almost one million students are sitting for JAMB examination annually and from private, public, state and federal university, they can’t admit more than 300,000. The question now is will the remaining 700,000 get to?

“From investigation, in the last 20 years, we have gone backward in the education sector, the stakeholders must rise up to this. Let me take the surgeon examination for example. Sometimes, around 40 years ago, when the West Africa surgeon examination is conducted, Nigerians always come tops but not anymore.

“OAU, UNILAG, Unilorin and University of Ibadan, UI are institutions that have been producing the best surgeons, not only in the country, but in the whole of Africa. But in the last ten years, reverse is the case and that is now the situation in Nigeria. If we do not quickly address it, things would get worse.

“For those of you who today find yourselves in the world of activism, you should know that there was a reason for being where you are today and you must support those coming behind you, else, your own children will not rest,” Gbajabiamila advised.

Corroborating the Crescent University Vice Chancellor’s view, another University don, Prof. Olufunmilayo Obilade, Vice Chancellor of Tai Solarin University of Education, TASUED, Ijagun, posited that Nigerian youths have contributed in no small measure to the socio-political development of Nigeria right before the independence.

Obilade, who was represented by the institution deputy Director, Directorate of Academic Planning, Quality Assurance and Research, Mrs Adefunke Ekine disclosed that the youths represents about 63 per cent of the nations population.

She affirmed that the population of youths out of school are 10.5 million and among those that were admitted into primary schools, 44 per cent transit to secondary schools.

Highlight of the events was the crowning of Miss NANS 2015 and award presentation to some personalities in the state including three members of the Nigerian Union of Journalists, NUJ, Ogun State Correspondent Chapel.

They are the Ogun State correspondent of The News/PMNews, Abiodun Onafuye, Sulaiman Fasasi of the Nigerian Pilot and Abiodun Lawal, News Agency of Nigeria, NAN.