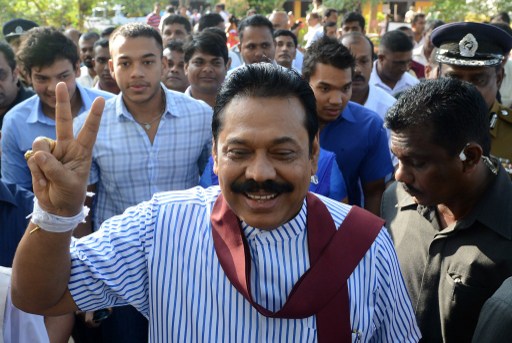 Sri Lanka’s Mahinda Rajapakse has conceded defeat in presidential elections, officials said Friday, after a bitter campaign that saw Asia’s longest-serving leader brought down by allegations of corruption and a failure to bring about post-war reconciliation.

After the island’s tightest presidential vote in decades, a top aide to Rajapakse said the one-time strongman accepted the decision of voters who turned out in force on Thursday.

“The president concedes defeat and will ensure a smooth transition of power, bowing to the wishes of the people,” presidential press secretary Vijayananda Herath told AFP, adding that he had already vacated his main official residence in a symbolic gesture of defeat.

Official sources said opposition presidential candidate Maithripala Sirisena, a former minister who united a fractured opposition to pull off an unlikely victory, had an unassailable lead in results announced so far.

With nearly a third of the ballots officially declared, Sirisena has 52.49 percent of the vote and Rajapakse 46.21 percent.

“The president has seen a clear majority for the opposition candidate and there is no way to overcome that,” a source close to the outgoing president said.

Herath said Rajapakse had conceded defeat during a meeting with Ranil Wickremesinghe, who leads the opposition in parliament and who Sirisena has said would be appointed as his prime minister.

Opposition lawmaker Harsha de Silva said transitional arrangements were being discussed with Rajapakse, and that Wickremesinghe had “guaranteed him and his family security”.

There was no immediate comment from Sirisena who was still at his private home in Polonnaruwa, east of the capital Colombo.

Rajapakse had seemed assured of victory when he called snap polls in November seeking an unprecedented third term, five years after crushing a violent separatist rebellion that had traumatised the country for decades.

But he has become unpopular in recent years, dogged by accusations of increasing authoritarianism and corruption, and a failure to reach out to minority Tamils after a decades-long civil war.

Sirisena’s surprise decision to defect from the government and stand against him galvanised disparate opposition groups.

Despite sporadic campaign violence including the death of one opposition party worker, the vote passed off largely peacefully, although there were some reports of intimidation in Tamil areas.

Police said they had made 175 election-related arrests, but described the polls as some of the most peaceful in Sri Lanka’s recent history.