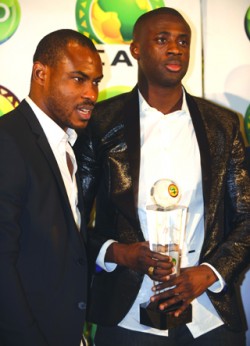 Super Eagles of Nigeria’s goalkeeper, Vincent Enyeama is indeed a good footballer with a great fair play spirit. He displayed this quality yesterday night after Ivorian Yaya Toure was named African Footballer of the Year for a record fourth straight time at the annual Glo- Confederation of African Football awards.

Some soccer pundits have thought that Enyeama would break the jinx of a goalkeeper coming from behind to win the award after he scaled the hurdles and was short-listed among the best three for the prestigious African football award, but the Manchester City of England star joined Samuel Eto’o as the only players to win the continent’s top individual award four times but only Toure has done it in successive years, starting in 2011.

“I’m not a bitter loser,” Enyeama told a world press conference at the Eko Hotel & Suites, Lagos last night. “I congratulate Yaya and I thank God for him winning this award again. Let me say that this award is about voting and the process is transparent,” he said.

The Lille of France goalkeeper was however sad that the Eagles who he captained would miss the 2015 Africa Cup of Nations taking place in Equatorial Guinea from 17 January, saying “it pains that we won’t be at the Nations Cup this year.”

Meanwhile, CAF’s website said that Toure’s award comes on the back of his stellar performances for City in the Premier League rather than his achievements with the Ivory Coast. The Ivorians failed to reach the second round at last year’s World Cup in Brazil and struggled through the qualifiers for the 2015 African Nations Cup.

The 31-year-old Toure scored in Manchester City’s League Cup final win over Sunderland in March and notched 20 goals in helping his side regain the Premier League title, a feat for a midfielder that only Frank Lampard had managed before him.

“This award will be a boost for me because I always think of putting my best in anything I’m doing. Vincent and Pierre-Emerick Aubameyang are also good with their clubs and countries but I’m lucky to have won the award again.