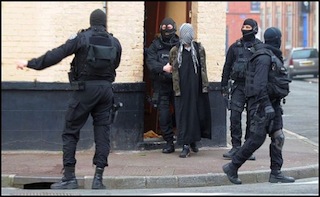 Canadian police arrested two brothers on terrorism-related charges Friday, less than three months after the country suffered two Islamist-related attacks — one of them on the nation’s parliament.

Ashton Carleton Larmond and Carlos Larmond were charged with counts related to terrorist activities, the Royal Canadian Mounted Police said in a statement.

They were both listed as 24 years old and appear to be twins.

Carlos was apprehended at Montreal’s international airport just before departing to “travel overseas for terrorist purposes”, the police said. Ashton was charged with “facilitating terrorist activity” and participating in a terrorist group.

“Today’s arrests speak to our ability to tackle a threat that is multifaceted and constantly evolving,” said Canadian police official James Malizia.

The arrests come after Islamist attacks in France killed 17 people, including 12 people at the satirical magazine Charlie Hebdo.

Police called on Canadians to be vigilant, but did not provide details of the alleged terrorist activity.

In October, two soldiers were killed in separate attacks in Canada. In one, a soldier was fatally shot while standing watch at the War Memorial in Ottawa. His attacker, Michael Zehaf-Bibeau, then stormed into parliament and exchanged fire with police before being shot dead.

In the other, 25-year-old Martin Couture-Rouleau, who had been on a watch-list of suspected extremists, ran over two soldiers in a parking lot, killing one of them before being shot dead by police.