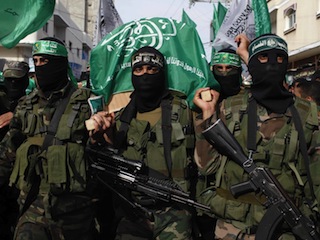 A statement in French said Hamas “condemns the attack against Charlie Hebdo magazine and insists on the fact that differences of opinion and thought cannot justify murder.”

It also rejected Israeli Prime Minister Benjamin Netanyahu’s comments, in which he compared the Paris attack to Hamas firing rockets from the Gaza Strip at civilians in Israel.

“Hamas condemns the desperate attempts by … Netanyahu to make a connection between our movement and the resistance of our people on the one hand and global terrorism on the other,” it said.

He said that Abbas assured the French president of “the solidarity of the Palestinian people and leadership with France after this terrorist attack.”

Malki said that a delegation of Palestinian Muslim and Christian clerics would pay a solidarity visit to France “in the coming days.”

The Palestine Liberation Organisation called for a public rally to be held in Ramallah on Sunday “in solidarity with France against terrorism.”