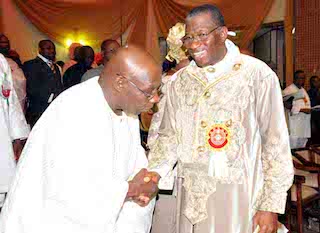 Obasanjo and Jonathan in Abuja on Saturday 10 January

Former Nigerian leader, Olusegun Obasanjo made a surprise appearance at the wedding of a niece of President Goodluck Jonathan in Abuja today, despite his serial denunciations of his government.

The latest was Obasanjo’s claim that Jonathan’s government had wasted $45 billion foreign exchange reserve left by his administration. He said he bore no personal grudge against Jonathan and that he was only concerned with good governance.

And President Goodluck Jonathan had responded in like measure, with aides disputing Obasanjo’s figure and Jonathan describing some elder statesmen as ‘motor park touts’.

The marriage in Abuja today was between Inebharapu Paul, Jonathan’s niece and Simeon Onyemaechi. The wedding held at the Abuja National Christian Centre.

According to PUNCh online, Obasanjo’s appearance caused quite a stir at the ceremony.

He arrived the venue in company of Dr. Andy Uba and some other aides before the commencement of the service.

His arrival attracted a loud ovation from those who were already seated, especially women.

He was ushered into the hall amidst standing ovation by his admirers and took his seat at the VIP section.

He was later joined at the section by the President of the Senate, David Mark and his wife.

About 20 minutes after, Jonathan entered the hall with his wife, Patience, and the bride.

The President and his wife took turn to exchange pleasantries with Obasanjo, Mark and other dignitaries before taking their seats.

Obasanjo’s introduction during the service also attracted a loud applause from the congregation.

In his vote of thanks at the service Jonathan specially recognised Obasanjo’s presence, saying, “Let me appreciate our father, President Olusegun Obasanjo, for being here with us. Thank you for coming.”