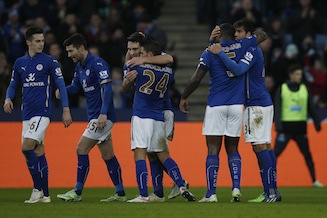 Paul Konchesky fired Leicester to a 1-0 win over Aston Villa on Saturday to give the Premier League strugglers a welcome boost in their bid to remain in the top flight.

The bottom of the table Foxes have a long road ahead to avoid relegation but this home success pushed them up to 17 points, level with Crystal Palace ahead of their run out against Tottenham.

Tempers flared right at the end when first Leicester’s Matty James was sent off for a rash challenge with Villa’s Ciaran Clark also red-carded as the two sets of players clashed.

Leicester’s veteran Australian goalkeeper Mark Schwarzer was on the bench after his 18-month loan signing from Chelsea this week.

Manager Nigel Pearson made five changes from the side that held Liverpool to a 2-2 draw on New Year’s Day, with Leonardo Ulloa, David Nugent, Konchesky, Marc Albrighton and Anthony Knockaert all facing Villa.

Leicester, seeking to stretch their unbeaten run in all competitions to four matches, began the brighter, with Nugent seeing a volley deflected out of danger early on.

On the quarter of an hour mark former Villa winger Albrighton charged down the left before finding Nugent who with only Villa keeper Brad Guzan in his path sliced wide.

The 29-year-old striker was off target again with his head, and then watched as his looping shot over Guzan hit the crossbar.

With one minute before the interval Leonardo Ulloa’s overhead kick found Konchesky who produced a great strike to send Leicester into the break deservedly in front.

Only smart work from Guzan prevented Leicester doubling their lead shortly after the restart.

Albrighton had sent in another cross into the area, only for the Villa keeper to keep out James’s header.

Villa had their 30-year-old United States international to thank again when he parried away a volley from Albrighton minutes later as Leicester looked to put the game to bed.

As the game entered the final quarter Villa’s unmarked Tom Cleverley side footed wide off a corner as down at the other end Tom Lawrence, on for Albrighton, had a right-footed shot sail over the bar.

While Leicester remained at the foot of the table Villa slipped a place to 13th, only three points above the drop zone.