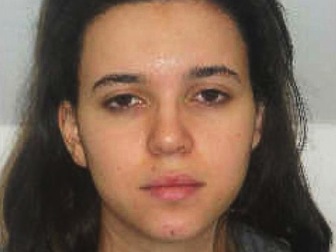 A crossbow in her hands and covered top-to-toe in a black Islamic headwear and robe that leaves only her eyes visible — that is the image now circulating of France’s most-wanted woman: Hayat Boumeddiene.

The 26-year-old is partner to Amedy Coulibaly, one of the three gunmen shot dead by police after three days of mayhem in France.

The photo, first published by Le Monde newspaper, contrasts with the one French police issued in its public appeal to locate her following Friday’s bloody drama, in which Coulibaly was killed by police commandos after he took hostages in a Jewish supermarket in Paris.

The mugshot provided by the police shows a sleepy-eyed young woman, her face and brown hair showing, whom they had questioned in 2010 about Coulibaly.

The police notice, however, warns that she is considered “armed and dangerous”.

She is suspected of being Coulibaly’s accomplice in the murder of a policewoman in southern Paris on Thursday, during a massive manhunt for two brothers who a day earlier massacred 12 people at the offices of the satirical weekly Charlie Hebdo.

Police also suspect she might have had a hand in Coulibaly’s supermarket hostage-taking, though she was not identified among the dead or wounded.

Coulibaly was a 32-year-old longtime criminal who apparently became a radical Muslim during one of his frequent stints in prison.

He claimed in a brief phone call to French television station BFMTV midway through the supermarket siege that he belonged to the Islamic State jihadist group.

Coulibaly also said he had coordinated his hostage-taking with the other two gunmen, brothers Cherif and Said Kouachi, who claimed separately to BFMTV that they belonged to another fundamentalist group, Al-Qaeda in Yemen.

Cherif Kouachi, a 32-year-old Frenchman of Algerian descent, was said to have pushed Coulibaly, also a French citizen, towards extreme Islam while the two were in prison together.

There was “constant and sustained” communication between Boumeddiene and the girlfriend of Cherif Kouachi, according to Paris’s chief prosecutor François Molins, who said “more than 500 calls” were made between the two women in 2014.

Investigators are now going through telephone records and wiretaps, and other material seized during searches, to determine the extent of the complicity and anyone else who might be connected to the gunmen.

But the focus right now is on Boumeddiene.

Coulibaly moved back in with her in May last year when he was released from his last period behind bars.

One of seven children to a mother who died when she was six, Boumeddiene was put into foster care with her young siblings because her father, a delivery man, was unable to take care of them.

She had a religious ceremony in 2009 to “marry” Coulibaly, though such unions are not recognised in France unless preceded by a civil ceremony conducted by local officials, and the couple lived in a modest apartment in the poor suburb south of Paris.

Le Parisien newspaper said she lost her job as a cashier because she insisted on wearing the top-to-toe Islamic wear known as a niqab.

Boumeddiene accompanied Coulibaly several times to a forest in central southern France to fire a crossbow. Le Monde published several photos of the couple holding up the weapon, with Boumeddiene wearing her niqab.

Her whereabouts are not known, but thousands of police have been deployed to actively search for her.