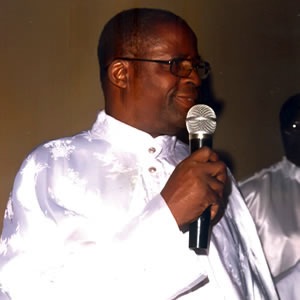 The spiritual leader of the Cherubim and Seraphim Movement Church Worldwide, Ayo Ni O, Prophet Gabriel Olubunmi Fakeye has died at the age of 78.

Fakeye was said to have died on Sunday morning in a hospital in the United States of America after a brief illness.

There are mourning among leaders and members of the C&S family over the demise of their leader, who was known to be fearless when discussing national issues and will say his mind not minding whose ox was gored.

A Prophetess in the church, who does not want her name mention said Fakeye died on Sunday, saying that he had been sick for sometimes.

She said the leadership of the church would soon issue a release to officially announce the death of their leader at the age of 78.

Fakeye was born in 1937. He was an engineer, who started preaching the gospel at his tender age. He was popularly called “Bro Aladura” in his youthful days and remained a preacher until his dying days. Even though he was advanced in age, he continued to administer the movement (Ayo Ni O) he founded.

Fakeye was a visionary leader with profound knowledge, grasp, and appreciation of history. He was renowned for his conviction and faith in the unity and greatness of Cherubim and Seraphim Church in Nigeria and the entire world. He was also a believer in the unity of Christianity worldwide, as he was not a sectional leader.

Until his death, he ran both television and radio programmes in a number of broadcast stations, including the G.O Fakeye television programmes featuring the secret of psalms and healing as a result of which he became a target of government scrutiny for these claims.

Prohpet Fakeye is survived by wife, a son, six daughters and grand children.