Cameroon pushes out Boko Haram from military base 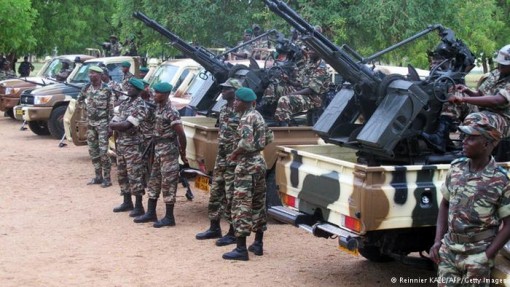 Cameroon’s army repelled an attack Monday by Nigerian Boko Haram Islamists on a military base bear the northwest border after intense fighting, the AFP has reported quoting a military source.

“A group of Boko Haram fighter attacked Kolofata (in the far northwest) this morning. They specifically targeted the military base in the town,” a police source said.

“The fighting was intense, but they were pushed back. We inflicted casualties upon them, there were none on our side,” an official from the army’s elite Rapid Intervention Battalion told AFP.

A local source said that residents fled the city “as soon as people heard the first gunfire,” in the town, which also houses police, elite army and local government premises.

No casualty figures were given.

Boko Haram has seized dozens of towns and villages in northeast Nigeria in the last six months and now reportedly controls large parts of Borno state, which borders Niger, Chad and Cameroon.

The territorial gains have led to fears of a total loss of government control in the region and seen Nigeria’s President Goodluck Jonathan fiercely criticised for his failure to end the insurgency.

More than 13,000 people have died since Boko Haram launched its insurgency in 2009 and hundreds of thousands more have been made homeless.

Last month, Cameroon sent warplanes into action against Boko Haram fighters for the first time, after a large force of jihadists crossed the border and seized a military camp.

Kolofata has been attacked by Boko Haram on several occasions.

Several people were killed in an attack last July and 27 people, including the wife of a deputy prime minister, were kidnapped in two separate raids.

The hostages were freed after several weeks in captivity.