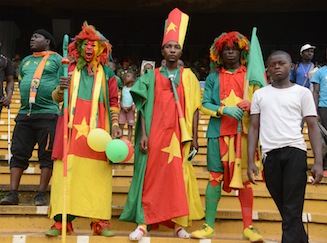 The Africa Cup of Nations begins in Equatorial Guinea on Saturday, with organisers crossing their fingers for a successful tournament after a build-up dominated by Morocco’s refusal to act as hosts amid fears over Ebola.

The small, oil-rich central African state stepped in to save the day for the Confederation of African Football (CAF) in mid-November when they agreed to host the competition, despite having barely two months to prepare.

Morocco had initially asked the CAF to postpone the event to avoid any risk of a spread of the Ebola virus, which has so far killed more than 8,000 people in the worst-hit countries of Sierra Leone, Liberia and Guinea.

However, that request was dismissed, and Morocco were thrown out of the competition.

And excitement about staging the 16-team event in football-mad Morocco has given way to hope that Equatorial Guinea will be able to stage a satisfactory tournament.

“We are disappointed because Morocco is a great country with lovely stadia and fervent support,” Tunisia’s Wahbi Khazri told Le Point Afrique.

“Equatorial Guinea is a different country and the organisation will be different. We will just have to get on with it.”

The Equatoguinean government have taken measures to prevent Ebola from reaching their soil, including hiring the expertise of a team of Cuban doctors, but as for the football, many matches are likely to be played in front of largely empty grounds in the former Spanish colony, which has a total population of just over 700,000.

The country ruled with an iron fist by president Teodoro Obiang is not a footballing hotbed, although it does have experience of organising the CAN, having co-hosted the 2012 tournament with Gabon.

The capital Malabo, on the island of Bioko in the Gulf of Guinea, and the largest city Bata, on the African mainland, both hosted games then and will do so again, with Bata the venue for the final.

However, organisers are taking a step into the unknown with matches also being played in the interior towns of Mongomo and Ebebiyin, where facilities are seemingly scarce and the quality of the venues questionable.

“The accommodation in Ebebiyin and Mongomo is perfect and ready…there is no problem,” the country’s sports minister Pascual Eyegue Obama Asue insisted last week, before adding that “everything is being resolved” to get the stadia prepared on time.

However, Algeria coach Christian Gourcuff, whose team will be based in Mongomo in the group stage, admitted his concerns last week, saying: “We know in advance that we are going to have infrastructural problems which is why we put back our departure for Equatorial Guinea until four days before our first game.”

The leading team on the continent according to the FIFA rankings, Algeria find themselves in one of two incredibly tough groups, with the Desert Foxes drawn alongside Ghana, Senegal and a resurgent South Africa in Group C.

The winners of that section can look forward to a quarter-final tie against the runners-up in Group D, which contains much-fancied Ivory Coast, Mali, Cameroon and Guinea.

In contrast, the other half of the draw, featuring Tunisia, 2013 runners-up Burkina Faso and the hosts, lacks the same strength in depth.

Playing down claims that Algeria are the favourites, Frenchman Gourcuff said: “We must guard ourselves from any excess of confidence. It would be a major mistake to listen to such predictions.”

At least Algeria need not worry about Nigeria, with the 2013 champions unable to defend their trophy after surprisingly failing to qualify despite a good World Cup.

Record seven-time champions Egypt also missed out, and so others, such as South Africa, will hope to make their mark.

“I have told the players not to fear anybody because we have no reason to feel inferior,” said Bafana Bafana coach ‘Shakes’ Mashaba, who went unbeaten through qualifying but have had to deal with the loss of murdered captain and goalkeeper Senzo Meyiwa.

Meanwhile, little is expected of the hosts — who face Congo Brazzaville in the opening game — after they were initially disqualified from the competition for fielding an ineligible player and only appointed a coach in Argentine Esteban Becker last week.