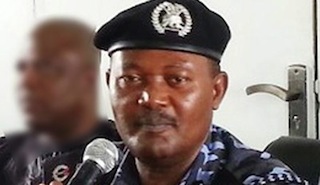 Joseph Mbu, the Assistant Inspector General (AIG) in charge of Zone 7 Police Command, has warned that the police would no longer tolerate the killing of its personnel under any guise.

Mbu gave the warning in Abuja at a dinner held on Saturday night for policemen under the command, to appreciate their hard work and sacrifice in 2014.

“We are hardly appreciated, wherever there is crisis, we go there to make peace but we are killed. Honestly, any policeman who is killed by any community in my zone, I will bring that village down, we have to rise against the killing of policemen.

“I am radical officer but a rebel with a cause; we protect everybody, we do not work for ourselves, we are working for the nation; we must be respected, regarded and appreciated,” he said.

Mbu noted with satisfaction that except for some communal clashes, the zone was relatively peaceful in 2014.

He promised to ensure peace during and after the forthcoming general elections, warning, however, that the command was prepared to deal with any post-election security issues.

The AIG charged police personnel in the three commands that make up the zone to be professional, civil and friendly in dealing with the public.

He also charged them to be courageous in confronting situations.