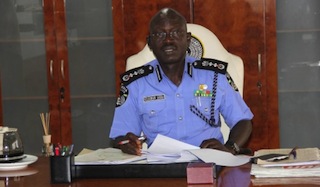 Inspector General of Police, Suleiman Abba on Monday warned politicians and their supporters against violence before next month’s presidential election, after reports of weekend clashes in the south and central region.

Last week, the main opposition All Progressives Congress (APC) alleged that its supporters in the southern state of Rivers were attacked on their way to a presidential campaign rally.

On Sunday, an explosion damaged the APC office in Aba Ama town in the state, while four party supporters were allegedly attacked with machetes in Rumueme near the state capital, Port Harcourt.

Thirteen suspects were meanwhile arrested in Jos, the capital of central Plateau state, after buses belonging to President Goodluck Jonathan’s campaign were torched on Saturday.

“The perpetrators of these unacceptable and heinous acts will not go unpunished, as the police will do all it takes to bring them to justice,” Nigeria’s police chief said.

Electoral violence has blighted past polls since Nigeria’s independence from Britain in 1960 and there have been warnings that there could be a repeat of clashes in 2011, which left hundreds dead.