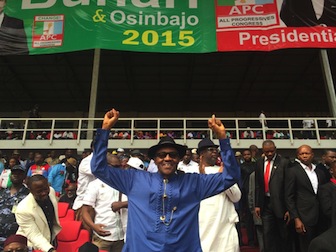 General Muhammadu Buhari on the podium in Port Harcourt

The All Progressives Congress (APC) Presidential Flag-bearer, Gen. Muhammadu Buhari, on Monday, urged his supporters to abide by the rule of law and must not tarnish the party’s image.

Buhari gave the advice at the inauguration of his campaign office and the presidential campaign council in Abuja.

According to him, no supporter should be rude to any leader on his behalf because it will amount to anti-party activity.

“I expect you to re-double your effort, I expect total support. I urge you not to insult or be rude to any leader on my behalf. Your conduct must not tarnish the image of the party.

“The opposition is committed to the rule of law. Learn to be vigilant before, during and immediately after elections. Don’t take the law into your hands, no matter the provocation.”

He pledged that under the APC-led government, no Nigerian would go to bed hungry or angry at government.

“We promise you a landslide win and to us it’s a done deal.”

Earlier, Governor Rotimi Amaechi of Rivers and Director-General of Buhari’s campaign, said the party must get its acts right the first time.

“No one can deliver the APC, only three people: God, the people and you. There can’t be another chance like this and we can’t afford to disagree on any issue.

“The only source of disagreement should be the will to get it right, luckily, we have a wonderful candidate to sell, please join us.”

Ameachi told the audience that the party Chairman, Chief John Oyegun, was robbed overnight, adding that the development accounted for his visible absence from the gathering.

In his vote of thanks, Buhari’s running mate, Prof. Yemi Osinbajo, said “no-one knows where or how the wind blows but come Feb. 14, that wind will blow Gen. Buhari, prosperity and security into government.”

The campaign continues in Imo state on Monday and will be taken to the South-West and end in the North-Central on January 18 before the campaign for the Northern region campaigns begins.