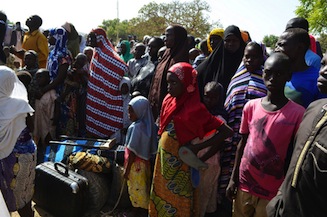 The United Nations on Tuesday said that the latest wave of Boko Haram’s “vicious, ruthless attacks” in northeastern Nigeria had sent 11,320 people fleeing into Chad in a matter of days.

The Islamist group stormed the town of Baga on January 3, and subsequently razed it and at least 16 surrounding settlements.

While it has been impossible for aid workers to enter the area to verify accounts of the slaughter and of corpses rotting in the streets, the attack is feared to have been the worst massacre since Boko Haram’s deadly insurgency began in 2009.

Some 20,000 people are said to have fled their homes in the area since the attack, and the UN refugee agency said Tuesday that some 11,320 people had arrived in neighbouring Chad alone.

A full 60 percent of the new arrivals in Chad were women and girls, UNHCR spokesman William Spindler told reporters, adding that 84 unaccompanied children had also crossed over.

Another 2,000 people had become stranded on an island in Lake Chad during their desperate escape, he said, adding that UNHCR was working to transport them to the mainland.

“We deeply deplore the vicious, ruthless attacks against civilians in… Baga,” Ravina Shamdasani, spokeswoman for the UN rights agency, told reporters in Geneva.

While the details of the attacks remained sketchy, she said it appeared “fairly certain… that mass killings and mass forced displacement have occurred.”

“The deliberate targeting of civilians is clearly prohibited by international law and we are very concerned at reports that there were children and elderly people among the victims,” Shamdasani said.

She voiced particular concern over Saturday’s attack at a crowded market in Maiduguri, also in Borno State, that killed 19 people and was apparently carried out by a 10-year-old girl.

“The use of a child to detonate a bomb is not only morally repugnant but constitutes an egregious form of child exploitation under international law,” she said, urging the Nigerian government to “act swiftly to restore law and order” .

Since Boko Haram’s insurgency began, some 135,000 people have fled the restive northeast of country and at least 850,000 have been displaced inside the region.