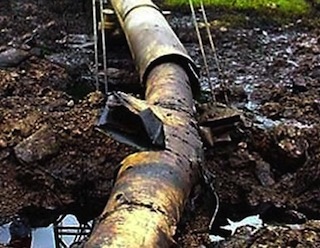 The Nigerian National Petroleum Corporation (NNPC) has called on Nigerians, especially those living in communities close to pipelines, to see them as their own and protect them.

This was contained in a statement issued on Tuesday in Abuja by the Group General Manager, Group Public Affairs Department, Mr Ohi Alegbe.

It said the corporation made the plea at the flag-off of a two-day Anti-Pipeline Vandalism Campaign in Idimu, Alimosho Local Government Area, Lagos State.

It said the campaign was organised to sensitise the host communities to the need to join in the war against pipeline vandalism.

It said the campaign included a roadshow, through the communities adjoining the pipeline right of way in the area, up to the Ejigbo Depot and the major pipeline vandalism flashpoints of Ijeododo and Arepo.

It called on residents to be vigilant and report all suspicious movements around the pipeline to the corporation or security agencies.

It explained that the oil that was spilled into the environment when vandals and oil thieves hacked into pipelines “destroys aquatic life, pollutes the ground water and renders water from boreholes unsafe for consumption”.

It added that it contaminated the soil and made it unfit to support any meaningful agricultural activity; and ultimately reduced the quality of life of the people living around such places.

It said the traditional ruler of Idimuland, Oba Azeez Olugoke II, called on all residents of the community to shun criminal activities, especially oil theft and pipeline vandalism.

The traditional ruler said that as a policy, the community would not protect anyone caught perpetrating such acts.

The Oba promised to take the message to the people and help mobilise the community to help tackle pipeline vandalism.