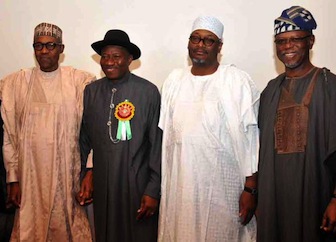 President Goodluck Jonathan on Wednesday signed the Abuja Accord, a document in which all presidential candidates for the 2015 election pledged to shun words that could incite violence before, during and after the elections.

Jonathan signed the document alongside Gen. Muhammadu Buhari and 10 other presidential candidates vying for Nigeria’s number one seat.

Some of the presidential candidates in attendance were Alhaji Gani Galadima of Congress Party of Nigeria, Mr Tunde Anifowose-Kelani of Action Alliance and Mr Rafiu Salau of Alliance for Democracy.

The presidential candidates appended their signatures to the document after a one-day election sensitisation workshop organised by the Inter Party Advisory Council in collaboration with some international development partners.

The Accord extracted promises from the candidates to take proactive measures to prevent electoral violence before, during and after the elections and re-affirmed their commitment to Nigeria’s constitution.

It stated that the candidates should be desirous of promoting the unity and corporate existence of Nigeria as an indivisible entity and be determined to avoid any conduct or behaviour that would endanger the political stability and national security of the country.

The candidates further pledged to place national interest above personal and partisan concern and abide by all rules and regulations as laid down in the legal framework for elections in the country.

“We, the under-signed, pledge to run issue-based campaigns at national, state and local government levels.

“In this, we pledge to refrain from campaigns that will involve religious sentiments, ethnic or tribal profiling, both by ourselves and all agents acting in our name.

“To refrain from making or causing to make in our names or that of our parties any public statement, pronouncement, declaration or speeches that have the capacity to incite any form of violence before, during and after the elections.

“To forcefully and publicly speak out against provocative utterances and oppose all acts of electoral violence whether perpetuated by our supporters and, or opponents.

“To commit ourselves and political parties to the monitoring of the adherence of this Accord if necessary, by a national peace committee made up of respected statesmen and women, traditional and religious leaders.”

They then urged all institutions of government, including INEC and security agencies, to “act and be seen to act with impartiality.”