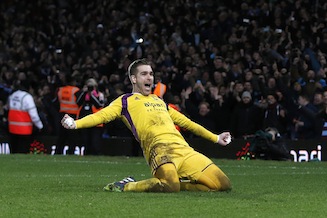 West Ham United goalkeeper Adrian proved an unlikely match-winner as his side edged 10-man Everton 9-8 in a nail-biting penalty shootout after a gripping FA Cup third-round replay on Tuesday.

Enner Valencia put West Ham ahead early in the second half at Upton Park and Everton then had Aiden McGeady sent off, only for Kevin Mirallas’s late free-kick to send the tie to extra time.

Mirallas teed up Romelu Lukaku to put the visitors in front, but West Ham substitute Carlton Cole made it 2-2 and the hosts prevailed when Adrian netted his spot-kick in the ensuing shootout after his opposite number Joel Robles had hit the bar.

“It was an unbelievable game for the fans. I feel really happy,” Adrian told BT Sport.

“I was relaxed when I stepped forward to take the penalty. We’ve got the victory and we go through to the next round.”

Valencia broke the deadlock six minutes into the second period when he gathered a pass from Andy Carroll and ambled wide of John Stones before squeezing an angled shot past Robles.

The visitors’ hopes of getting back into the tie received a weighty blow five minutes later when McGeady was shown a second yellow card for tripping Mark Noble.

Mirallas saw a close-range effort brilliantly blocked by James Tomkins, but after Robles had athletically tipped over a James Collins header at the other end, the Belgian claimed an 82nd-minute equaliser.

A foul by Collins on Lukaku gave Everton a free-kick on the left-hand edge of the West Ham area and Mirallas deceived Adrian by whipping a shot over the three-man wall and in at the near post.

After Robles had produced another finger-tip save to deny Kevin Nolan in the 89th minute, Everton’s Belgium internationals combined to put the visitors ahead in the first half of extra time.

Mirallas left three defenders in a spin on the left-hand side of the box and crossed for Lukaku to jab home from close range.

Both players were friends and former team-mates of Belgian youth international Junior Malanda, the Wolfsburg midfielder who died in a car crash on Saturday, and celebrated the goal by pointing to the sky.

Allardyce reacted by introducing Cole and he scored within a minute and 40 seconds of coming on, stabbing home Tomkins’s knock-down from a Stewart Downing corner seven minutes from the end of extra time.

With Lukaku and Morgan Amalfitano squandering late chances, the game went to penalties.

Adrian saved Everton’s second spot-kick, plunging to his right to thwart Steven Naismith, but Downing spurned a chance to settle the tie when his low penalty was kept out by Robles.

With the score 8-8, Robles stepped up, only to send his effort crashing against the bar.

The job of sending West Ham through fell to Adrian and after nonchalantly jettisoning his gloves in his run-up, he sent Robles the wrong way to put the east London club in the fourth round for the first time since 2011.

“It is heartbreaking because we were down to 10 men for a long period, but I thought we were the better side,” said Everton manager Roberto Martinez.

“The penalties were a bit of a lottery, but I couldn’t be prouder.”

Wolverhampton Wanderers lost on penalties to Fulham in an emotional match at a snow-bound Molineux, which took places hours after the death of former Wolves owner Jack Hayward.

Wolves led 3-2 in extra time, but Ross McCormack equalised for Fulham with a 120th-minute penalty and the visitors prevailed 5-3 in the shootout to set up a trip to Sunderland.