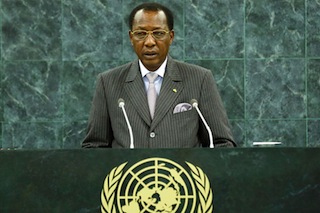 Chad’s government on Wednesday pledged “active support” for neighbouring Cameroon in fighting Boko Haram, after another cross-border raid this week by the Nigerian-based Islamist group.

The group is fighting to create a hardline Islamic state in northeast Nigeria along the border with Chad, Cameroon and Niger.

The government of Chad “expresses its solidarity with Cameroon and is disposed to provide active support in the courageous and determined response of its armed force against the criminal and terrorist acts of Boko Haram”, it said in a statement.

On Monday, Boko Haram fighters crossed into Cameroon to attack a military base in the northern town of Kolofata. The country was also targeted by the group in 2014.

Cameroon’s military said it killed 143 insurgents in firefight, and that one Cameroonian soldier was killed.

Chad has so far been spared attack by Boko Haram but only a thin sliver of land in northern Cameroon separates the desert state from the Islamists’ stronghold in Nigeria’s Borno state.

Chad has also been affected by the refugee crisis sparked by Boko Haram’s insurgency, which has killed over 13,000 people since 2009.

Over 11,000 people fleeing an onslaught last week on the Nigerian town of Baga sought refuge in Chad, according to the United Nations.

Deby’s government warned it would “not stand idly by” faced with the threat from Boko Haram and called on the west African ECOWAS bloc and international community to also step up their response.