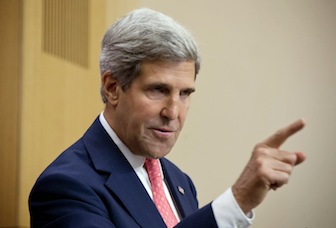 US Secretary of State John Kerry said Thursday that massacres in two Nigerian towns by the “evil” Islamist group Boko Haram this month constituted a “crime against humanity”.

“What they have done with respect to the slaughter recently is a crime against humanity nothing less,” Kerry told a news conference during a visit to Bulgaria.

“It’s an enormously horrendous slaughter of innocent people and Boko Haram continues to present a serious threat not just in Nigeria and the region but to all of our values and all of our sense of responsibility regarding terrorism,” he said.

“Boko Haram is without question one of the most evil and threatening terrorist entities on the planet today,” he said.

Hundreds of people, if not more, are feared to have been killed in the attacks that began on January 3 on Baga and Doron Baga on the shores of Lake Chad in northeastern Nigeria, according to rights group Amnesty International.

Kerry said he had discussed earlier Thursday with British Foreign Secretary Philip Hammond — who was also in Sofia — the possibility of “engaging in a special initiative with respect to Nigeria and with respect to Boko Haram”.

He said: “Nobody in the world should doubt the world’s determination I think, over time, to deal with this, as we deal with ISIS as we are dealing with Al-Shebab (in east Africa), as we deal with Al-Nusra (in Syria) and a host of groups that want to challenge the international values and morays which have guided the world for so long.

“Boko Haram obviously stands as a singular example of a threat to that structure.”

On Thursday rights groups released satellite images claiming to show massive destruction in the two Nigerian towns in what is feared to be Boko Haram’s deadliest strike in its six-year insurgency.

Nigeria’s military, which often downplays death tolls, said 150 died and dismissed as “sensational” claims that 2,000 may have lost their lives.